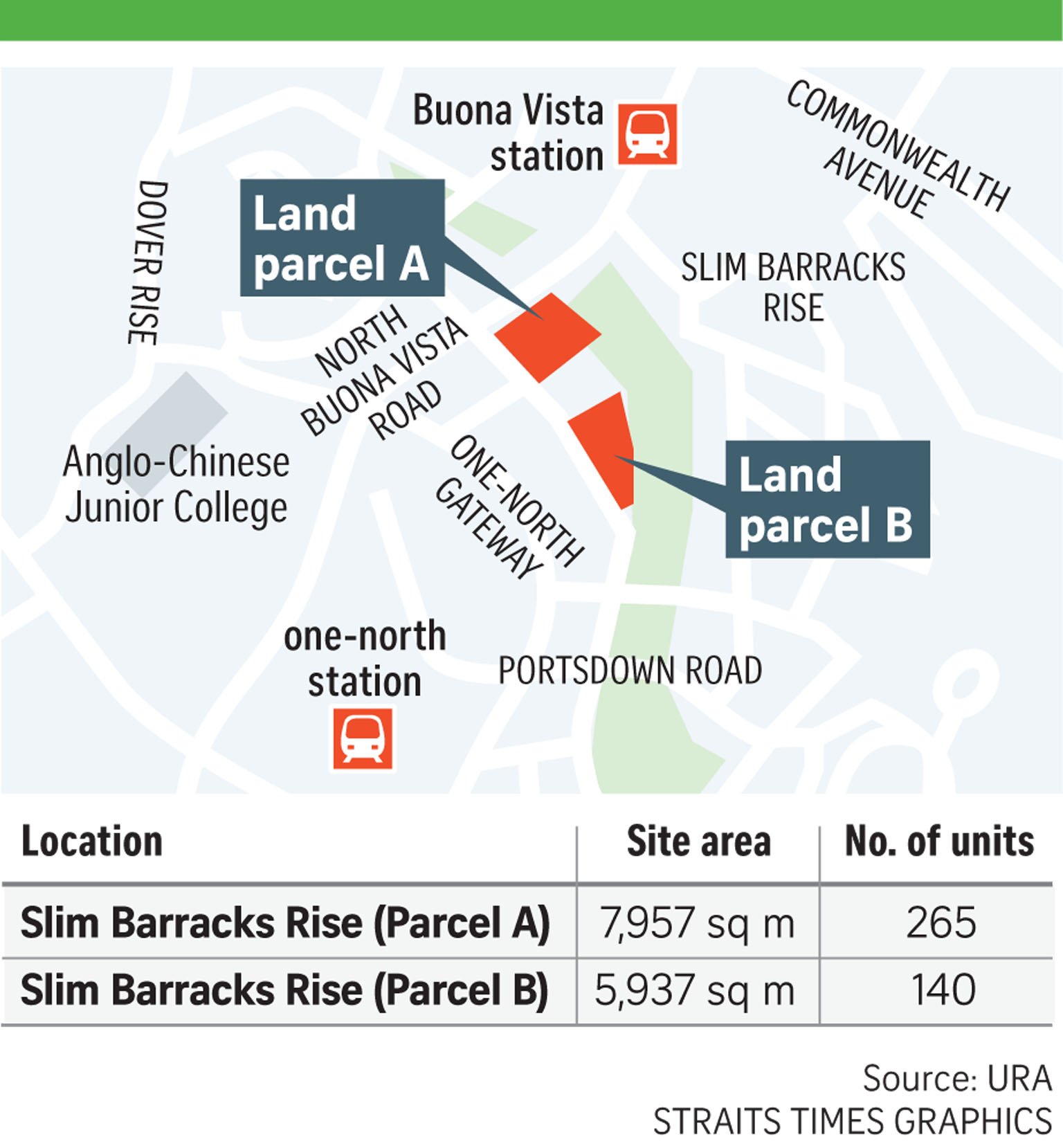 Both sites, which are zoned for residential development with commercial space at the first storey, have a lease period of 99 years. They fall under the confirmed list in the first-half 2021 government land sales (GLS) programme.

The parcels were launched for sale as part of JTC Corporation’s efforts to inject more residential space in the one-north precinct and enhance the area as a vibrant mixed-use business park for research, innovation and entrepreneurship. The tenders for the two land parcels will close at 12pm on Sept 28.

Yesterday’s tender launch comes on the heels of last week’s announcement by the Ministry of National Development of an increase in the supply of private homes from confirmed sites under the GLS programme.

Supply for the second half of this year was raised by nearly 25 per cent to 2,000 units, from 1,605 units for the first half of the year, in response to land-hungry developers and dwindling unsold inventory.

While this marks the second increase in the private home supply after five consecutive reductions in previous GLS confirmed lists, analysts called it a conservative and measured programme given the macro-economic uncertainties amid the Covid-19 pandemic.

Commenting on the Slim Barracks Rise sites, analysts said these could be especially appealing to developers because they are located near the Buona Vista and one-north MRT Stations, and surrounded by the one-north biomedical and technology hub.

Both sites are expected to be highly sought after by developers, given their location and the limited supply of private residential units in the area, said Mr Wong Xian Yang, Cushman & Wakefield’s head of research (Singapore).

“Site A is expected to garner more demand, given its proximity to the MRT stations and higher building heights which allow for better views. But given the small sizes and the same closing tender dates, we could see a developer bidding for both sites to mitigate future competition,” he added.

Both sites may also attract many bidders due to their lower total development costs.

“Developers could also be encouraged by the sales performance of nearby project One North Eden, which managed to sell 141 units or 85 per cent of the total of 165 units, at a median price of $2,009 during its first month of launch,” said Mr Ong Teck Hui, senior director of research and consultancy at JLL.

Ms Christine Sun, senior vice-president of research and analytics at real estate firm OrangeTee & Tie, expects 12 to 15 bidders for the two parcels, and bids to range from $1,100 per square foot per plot ratio to $1,200 psf ppr.

The prospect of commercial space within the development would enhance the parcel’s value as such sites typically command higher prices, said Mr Nicholas Mak, head of research and consultancy at ERA. Small GLS residential sites, which tend to attract small and medium-sized developers, are a minority, he noted.

Since 2015, the Government has launched 60 GLS residential sites (including executive condominium sites) for sale. Of these, only 14 small sites yielded fewer than 300 housing units each, he said.

Shophouses on Baghdad Street, Telok Ayer area up for sale