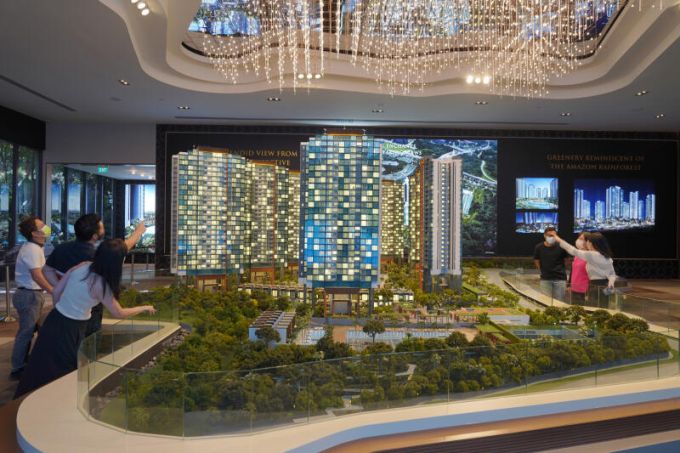 Including ECs, the top-performing project by sales volume in December was Normanton Park. The developer moved 73 units at a median price of S$1,831 psf. PHOTO: CMG

NEW private home sales in Singapore slumped during the final month of 2021, as a double whammy of year-end festivities and fresh property cooling measures weighed on transaction volumes.

OrangeTee & Tie senior vice-president of research and analytics, Christine Sun, noted that last month’s sales volume took a hit from the Dec 16 round of cooling measures, as well as the holiday season, which is when activity typically slows down.

Huttons Asia senior director (research) Lee Sze Teck said overseas vacations via the vaccinated travel lanes and the preparation for a new school term in 2022 played a role in the drop in new sales, while the market also “caught a chill” after the latest property curbs.

Developers’ sales in December tend to be lower than in November. Lee pointed out that in the last 14 years since the Urban Redevelopment Authority (URA) started providing the statistics, December’s new private home sales have exceeded November’s figures only in 2012 and 2020.

Nicholas Mak, ERA Realty’s head of research and consultancy, noted that another reason for the lower new sales was the relatively small number of units launched last month, as some developers took a wait-and-see approach after the new round of cooling measures. Only a few residential projects were put on the market in December 2021, including the 230-unit Perfect Ten, the 137-unit Mori and the 34-unit Zyanya, Mak said.

Next Monday (Jan 17), URA will release its official monthly sales data for December 2021.

Including ECs, the top-performing project by sales volume last month was Normanton Park, which is located next to Kent Ridge Park. Caveat data compiled by OrangeTee & Tie showed that the mega project’s developer, Kingsford Huray Development, moved 73 units at a median price of S$1,831 per square foot (psf). The District 5 project was launched in January 2021 and will have a total of 1,862 residential units.

The next best-selling project in December was the freehold condominium Mori, where 71 units fetched a median price of S$1,869 psf. Roxy-Pacific launched the 137-unit project, along Guillemard Road and Jalan Molek, on Dec 4 last year.

Based on transaction prices, the biggest proportion of new private homes sold, excluding ECs, again came from the S$1.5 million to S$2 million bracket. They made up 32.7 per cent of December’s total new sales involving landed and non-landed properties.

Homes in the S$1 million to S$1.5 million range accounted for 26.6 per cent of the volume, while those fetching between S$2 million and S$3 million contributed 25.7 per cent.

Those transactions far exceeded the third-highest price quantum in December, which came close to S$10.5 million or S$4,749 psf for a unit at Park Nova, also developed by Shun Tak.

Geographically, last month’s new sales were mostly located in the rest of central region (RCR) or city fringe. Developers moved 289 private homes, excluding ECs, in the RCR, which made up 44.9 per cent of the volume.

Mak from ERA noted that the RCR also posted the biggest month-on-month percentage drop in new sales for December, although this was due to the market segment’s high base in November.

He noted that the launch of Perfect Ten in Bukit Timah raised buyers’ interest in the CCR, which helped keep new home sales there relatively stable compared to the other market segments.

Launches in January 2022 will include that of Belgravia Ace, located off Ang Mo Kio Avenue 5 in the OCR. Mak said demand for the freehold strata-landed project is likely to be “healthy” as many buyers of landed housing are Singapore citizens who can avoid the additional buyer’s stamp duty (ABSD) if they are purchasing it as their only residential property.

Huttons’ Lee noted that “interest is understood to be very strong” for Belgravia Ace, and if the project sees a “strong sell-out”, that will send a positive signal to the market.

Lee also pointed out that 83 per cent of the purchases of new private homes in December were made by Singaporeans, while permanent residents (PRs) and foreigners accounted for 12.6 per cent and 4.2 per cent, respectively.

“Purchases by foreigners appeared to have made up a smaller proportion in December compared to previous months. More data over the next few months will indicate whether the latest cooling measures are effective,” Lee said.

The new measures are expected to affect foreigners more significantly than first-time Singaporean and PR homebuyers, given that the ABSD rate was increased by 10 percentage points to 30 per cent for foreigners.

Mak expects the lull in launch and sales activity for private homes to extend into January and February 2022, partly due to the Chinese New Year celebrations.