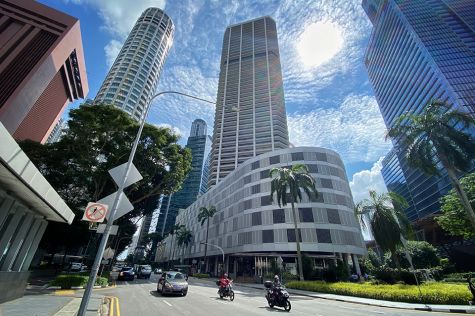 SINGAPORE’S real estate market has attracted some S$17.4 billion in investments in the year to date (YTD), as at Aug 23, just 1.6 per cent shy of the S$17.6 billion accumulated in the whole of 2020. These included all public-sector deals, as well as private-sector deals each worth S$5 million and above.

The top performer was the residential sector, which again captured the bulk of the capital. It amassed about S$10.8 billion worth of sales in 2021 YTD, already exceeding 2020’s full-year figure of S$8.7 billion.

There were 61 GCB transactions recorded in 2021 YTD, with the largest being the S$129 million sale of a Nassim Road bungalow in March to Jin Xiao Qun, wife of Nanofilm Technologies founder Shi Xu.

Within the broader residential sector, the top deal in the year thus far involved the 99-year leasehold Lentor Central government land sales (GLS) site, zoned for residential with commercial at first storey use, to GuocoLand for S$784 million.

Institutional investors, such as funds and real estate investment trusts, have poured an estimated S$3.4 billion into Singapore’s property investment sales market in the year thus far. That’s about one-fifth of the overall investment sales of S$17.4 billion.

In the other sectors, retail and mixed-use asset classes brought in some S$0.4 billion each.

The other two major deals were Ascendas Reit’s acquisition of the remaining 75 per cent interest in business park Galaxis for around S$540 million, and Lendlease Global Commercial Reit’s purchase of an effective 17 per cent stake in office and retail development Jem for S$353 million based on the agreed property value of about S$2.08 billion. 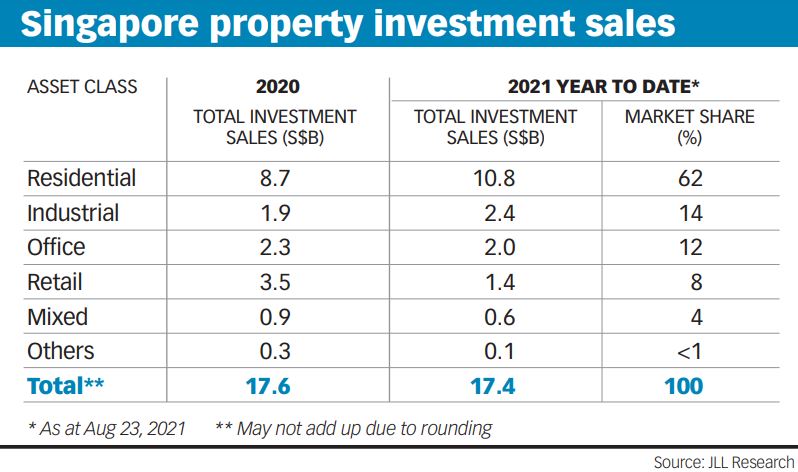 Institutional investors are expected to continue pushing ahead with their strategic portfolio reallocations, increasing their exposure to logistics and industrial assets for improved diversification and resilience.

Meanwhile, office assets will remain high on the radar for institutional investors, with the turnaround in Singapore office rents potentially intensifying competition for asset acquisitions.

Potential office deals to watch in the coming months would include PIL Building, One George Street, Twenty Anson, and 112 Robinson Road.

The S$2.7 billion collective-sale tender of International Plaza – a mixed-use development comprising strata shops, offices and apartments – in Tanjong Pagar is also an interesting one to watch. If concluded, it could become Singapore’s largest en-bloc deal in history, surpassing Farrer Court’s S$1.3 billion transaction in 2007.

As for residential development land, developers’ appetite should remain firm on the back of their fast-depleting unsold inventory and buoyant demand from homebuyers.

However, uncertainties and challenges arising from the pandemic, such as the construction labour crunch and higher building costs, could see developers being selective in their land acquisitions.

They can be expected to gravitate to GLS sites or smaller residential sites in the private sector to lower development risks.

In the rest of the year, we expect to see the conclusion of sales for several GLS sites that are designated for developments with significant residential components.

Last month, the concept-and-price revenue tender for the Jalan Anak Bukit commercial and residential site was awarded to Far East Organization and Sino Group, which submitted a S$1.03 billion bid.

The Marina View white site’s tender is scheduled to close on Sept 21. It will be sold for at least S$1.51 billion – the price at which the plot was triggered from the reserve list. The site can yield about 905 private residential units, 21,528 square feet in gross floor area of commercial space, and 540 hotel rooms.

Meanwhile, the tender for Parcels A and B at one-north’s Slim Barracks Rise is set to close on Sept 28. They are for residential developments with commercial use on their respective first storeys.

Jalan Tembusu and Lentor Hills Road (Parcel A) are scheduled for launch this month, and the tender awards could be announced just before the end of 2021. These two sites are designated for residential use, but the latter comes with the requirement to incorporate a childcare centre.

Should all the above deals materialise, and coupled with the expected robust demand from family offices and high-net-worth individuals for shophouses, GCBs and high-end apartments, there is potential for Singapore’s property investment sales this year to inch closer to the pre-pandemic annual average of S$31 billion in 2010-2019.