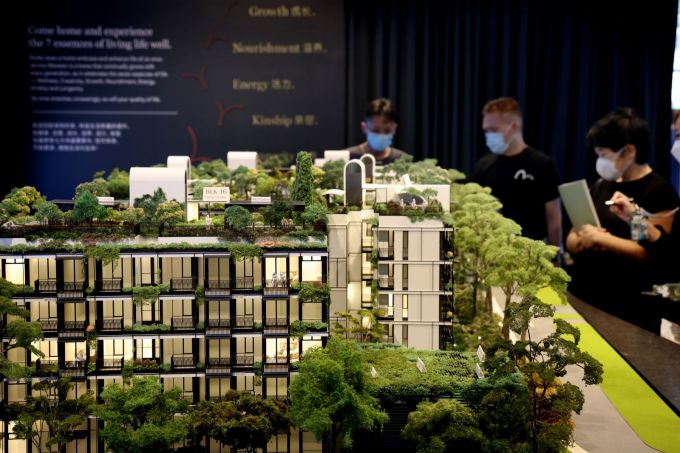 On a year-on-year basis, the latest estimates are 38.1 per cent higher than the 654 new private homes sold in October 2020.

Buying momentum was boosted by the near sell-out of Jervois Mansion on its first weekend of sales, said Lee Sze Teck, Huttons Asia senior director (research).

In September, when developers were holding back on major launches, new sales had dipped 31.4 per cent from August, representing the second consecutive monthly decline.

No new executive condominiums (ECs) – a private-public housing hybrid – were launched in October. Christine Sun, senior vice-president of research and analytics at OrangeTee & Tie, said this led to the estimated tally of new sales, after including ECs, slipping by 19.8 per cent month on month to 1,039 units.

The Urban Redevelopment Authority will release the official monthly sales data for October on Nov 15.

Nicholas Mak, ERA Realty Network head of research and consultancy, noted that some buyers found the unit prices attractive for a new freehold property in District 10.

Huttons’ Lee said Jervois Mansion recorded what was possibly the best first weekend sales for any project in 2021. He added that buyers were drawn to the development’s expansive land, which is a rarity in the Chatsworth-Bishopsgate vicinity, as well as its healthy and sustainable living concept.

The next best-selling project in October was the 99-year leasehold Parc Greenwich, where 84 units fetched a median price of S$1,251 psf. Mak pointed out that the 496-unit EC along Fernvale Lane was launched in September, which contributed to robust EC sales of 450 units in the primary market that month.

In contrast, the absence of launches in October resulted in EC sales returning to the usual monthly range of 70 to 160 units, he added. Developers moved 136 EC units last month.

Based on transaction prices, the biggest proportion of new private homes sold, excluding ECs, continued to come from the S$1.5 million to S$2 million bracket. They accounted for 30.8 per cent of total transactions in October.

Homes in the S$1 million to S$1.5 million range made up 26.6 per cent of the volume, while those fetching between S$2 million and S$3 million contributed to 25.9 per cent.

That far exceeded the second-highest price quantum in October – S$14.2 million for a fifth-storey unit at low-rise condominium MeyerHouse, translating to S$2,499 psf.

Sun from OrangeTee & Tie noted that the next 9 priciest transactions for non-landed homes were from Park Nova. The units, on levels 5 to 19, went for between S$10.6 million and S$13.8 million. The luxury project is located along Tomlinson Road and also developed by Shun Tak.

The outside central region (OCR) or suburbs again took the lead, making up 38.2 per cent of transactions excluding ECs.

The rest of central region (RCR) or city fringe contributed 31 per cent of the volume.

Meanwhile, the core central region (CCR) accounted for 30.8 per cent last month, a bigger share than September’s 20.1 per cent.

Lee from Huttons said the proportion of total new sales that were priced at S$2 million and above climbed to a high of 39 per cent in October, on the back of more transactions in the CCR, including significant deals such as the Les Maisons Nassim penthouse purchase.

ERA’s Mak noted that the CCR primary market usually has the smallest market share among the 3 regions. However, as the available stock of unsold units in suburban residential projects gradually decreased, the market share of CCR new sales increased in October, he said.

He expects new sales this November and December to rise, in part due to the launch of a few highly anticipated projects such as The Commodore, CanningHill Piers and Cairnhill 16.

Furthermore, some potential homebuyers in Singapore may continue to put their overseas vacation plans on hold and remain in the city-state, which means the primary market could still be active in Q4 2021. “Although there is a growing number of vaccinated travel lanes, the onset of winter is causing new waves of Covid-19 infections (in certain countries). This could deter some people from travelling,” he said.