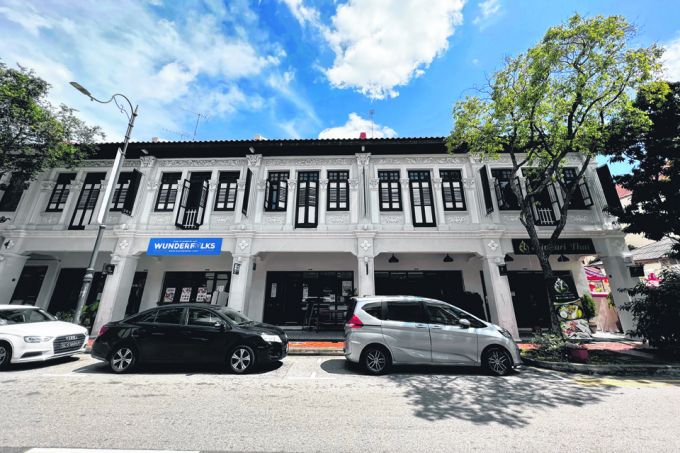 THE Singapore shophouse market has had a bumper year, with some 217 transactions totalling S$1.53 billion in the year to date, surpassing the previous high of S$1.46 billion in 2018.

The tally for last year was 145 transactions totalling S$913 million.

These figures are based on CBRE’s analysis of URA Realis caveats data downloaded on Nov 30 (with the latest transaction dated Nov 22).

The final figure for 2021 is expected to be higher, assuming buyers lodge more caveats for the latest deals.

For example, last week, the option to purchase 64 Club Street is understood to have been exercised at slightly above S$26 million by JL Family Office’s property investment arm, The Land Managers. The seller is an entity controlled by some members of the Chan family of Hong Kong which owns Wincome Group. The deal was brokered by Brilliance Capital and Savills Singapore.

The Business Timesunderstands that the option to buy Porcelain Hotel at 46-50 Mosque Street at S$90 million was also exercised recently by RB Family Office.

The property is being sold by entities controlled by Jason Lee Boon Leng of JForte Group of Companies, which will lease back the asset for 5 years. CBRE brokered the deal.

Market watchers told BT that there are many more transactions this year for which buyers did not lodge caveats, and hence are not captured in the Realis figures.

Typically, a buyer would lodge a caveat – which is a claim of interest in a property – after exercising the option to purchase. However, lodging of caveats is not compulsory.

Word on the street is that these buyers are mainly from China and are not taking any loans.

Amid strong demand for these heritage properties vis-a-vis their limited supply, more deals are hitting S$5,000 psf or higher on floor area in Districts 1 and 2 (D1/D2), say agents.

That said, comparing shophouse prices can be challenging as information on floor area is not included in the property title for most shophouses. Strata-titled shophouses are the exception; for these, strata area is included.

In general, D1 and D2 shophouse prices have risen about 15-20 per cent this year, estimates Richard Tan, senior group district director of PropNex.

A price of S$5,000 psf may be a record for South Bridge Road but a few other deals, so far not caveated, in the Amoy Street/Telok Ayer Street area are also said to have been done at close to S$5,000 psf or higher.

The buyer of 202/204 South Bridge Road is a Singapore-incorporated company fully owned by a Chinese citizen residing here.

Other shophouses clinched by China buyers this year include a pair of properties in Temple Street that fetched S$35.9 million and another pair in Craig Road that went for S$29.6 million. The respective buyers of both are entities linked to parties from Xiamen city in Fujian province; neither lodged a caveat.

Likewise, there is no caveat record for the nearly S$45 million sale of 4, 5 and 6 Stanley Street earlier this year, which BT reported. This was via the sale of shares in entities owning the shophouses. The new owner, who hails from China, is a citizen of Saint Kitts and Nevis.

The list of purchases by China buyers sans caveat lodgement continues to grow, with 2 recent sales by Singapore Reinsurance: 103 Amoy Street (at S$22 million) and 55, 56, 57 and 58 Amoy Street (at about S$21.5 million), BT understands.

PropNex’s Tan said he began seeing sizeable presence of mainland Chinese buyers in the conservation shophouse market, mainly in the prime CBD areas, in Q3 2020. “They have scaled up their buying in 2021.”

CBRE’s senior director of capital markets, Clemence Lee, said that besides the mainland Chinese, Singaporean families and individuals, and Hongkong investors have been active shophouse buyers this year.

Savills Singapore director of investment sales and capital markets, Yap Hui Yee, says sellers this year still mostly comprise private equity funds and investors. However, compared with last year, they have been more open to putting their shophouses up for sale this year, as they want to capitalise on the sales momentum.

Shophouse investment group 8M Real Estate divested 61 Boat Quay at S$11.2 million and 17 Circular Road at S$10.7 million this year – at 37 per cent and 53 per cent above their respective purchase prices 4 years ago.

Yap of Savillls observes that D1 and D2 in the CBD, covering the Boat Quay and Chinatown historic district conservation areas, have remained popular this year. “However, we have also seen increasing interest in city-fringe areas such as the Jalan Besar and Joo Chiat secondary settlement conservation areas, where a shophouse’s floor area can be increased by building a new rear extension,” she said.

Savills recently brokered the sale of a row of 5 freehold shophouses at 201 Joo Chiat Road for S$31.5 million – nearly double the S$16.8 million that seller SilkRoad Property Partners paid for the asset in 2015. The buyer is a Singaporean family.

While shophouse prices have climbed this year, rental income has stayed flat or more likely declined. Ground-floor units of CBD shophouses are mostly leased to F&B businesses, most of which have been hit by the Covid outbreak.

Knight Frank executive director of capital markets Mary Sai says the volume of shophouse deals in 2022 will depend on whether owners are willing to release stock for sale.

CBRE’s Lee, too, noted that the recent surge in purchases has left very limited stock of 999-year/freehold shophouses in D1/D2 available for sale. “The scarcity is most acute for the Amoy/Telok Ayer/Boon Tat location. Typically, this area leads shophouse price increases for other parts in the CBD such as Boat Quay, Club Street and South Bridge Road.”

Knight Frank’s Sai said: “The outlook is still positive, as people continue to see Singapore as a safe haven; conservation shophouses in prime locations are trophy assets. Demand for D1/D2 shophouses will still be robust, but prices cannot continue to escalate in unlimited fashion as resistance will set in. Banks may not be willing to support loans for high-priced purchases. There are also concerns about interest rate hikes.”

That said, some buyers do not need loans. “There are many rich people in China wanting to take their money out. Once China opens its doors again, they will rush out,” said a seasoned property investor. “Unfortunately, the shophouse buying momentum will increase.”

Agreeing, a veteran agent said: “The strong shophouse buying interest this year and rental yield compression, despite a rising interest rate scenario, mean most buyers are eyeing capital appreciation, rather than looking at rental yields.”

A key draw of investing in shophouses on sites fully-zoned commercial is that there is no additional buyer’s stamp duty. Neither is stamp duty payable on exiting the investment.

Foreigners are allowed to buy entire shophouses, thus gaining ownership of land title – but only for shophouses that are on sites fully-zoned commercial and approved for commercial use.