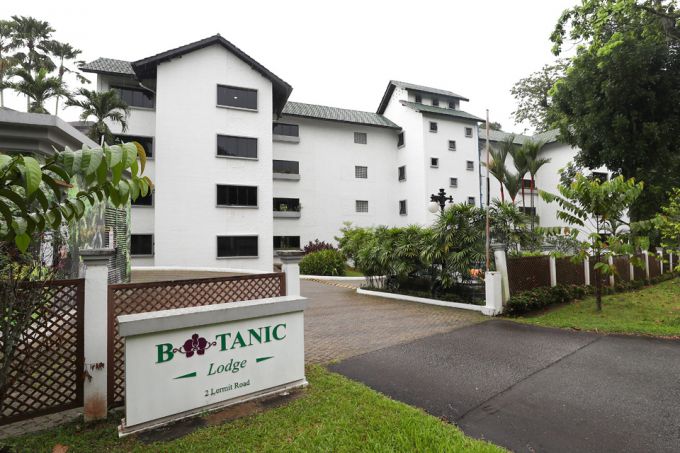 Amid the current sizzling Good Class Bungalow (GCB) market, a plum property just a stone’s throw from the Singapore Botanic Gardens has been generating much interest.

Sitting on nearly 90,000 sq ft of freehold land at 2 Lermit Road, within the Cluny Park GCB Area, the property could be worth S$300 million (S$3,340 psf) or more, according to market watchers.

A transaction at this level would be a record in absolute price terms for a GCB Area, surpassing the S$230 million that a Nassim Road bungalow was sold for by Wing Tai Holdings chairman Cheng Wai Keung two years ago.

The Lermit Road property is held by a privately-owned vehicle of Stamford Land executive chairman Ow Chio Kiat and his family. Currently on site is Botanic Lodge, an old low-rise apartment development, but market watchers say the highest and best use for the site would be to redevelop it

into bungalows, or possibly a grand mansion fit for a billionaire. The site, with triple road frontage, including along Cluny Road, is big enough to be carved into as many as five bungalow plots based on the 1,400 square metre (or about 15,070 sq ft) minimum plot size stipulated by the Urban Redevelopment Authority (URA)as the planning norm for newly created bungalows in GCB Areas.

Bungalows in the 39 gazetted GCB Areas are the most prestigious form of landed housing in Singapore, with strict planning conditions to preserve their exclusivity and low-rise character. One generally has to be a Singapore citizen to be allowed to acquire a landed property in a GCB Area.

hands ona site like 2 Lermit Road, but they are unlikely to be the best buyers in today’s world of new-found wealth and imported Singaporean billionaires seeking plots for their homes.”

“Because of the gross mismatch of availability of large GCB plots for sale in locations that are regarded as the best, and the staggering levels of new wealth in Singapore, it’s almost anyone’s guess what this site could fetch. It’s beyond valuation science or land economics!”

The higher end of this range is derived from the $4,005 psf record price achieved in March for bungalow redevelopment land in a GCB Area, when an old bungalow ona 32,159 sqft freehold site in Nassim Road transacted for $128.8 million. It was bought by Jin Xiao Qun, the wife of Nanofilm Technologies International founder and executive chairman Shi Xu. The seller is Oei Siu Hoa, also

known as Sukmawati Widjaja, the controlling shareholder of Top Global.

Steve Tay, senior associate vice-president of List Sotheby’s International Realty (List SIR), said: “Already, a benchmark has been set. The price for 2 Lermit Road would likely have to at least match that in order for Mr Ow to consider a sale.”

Most market observers agree with this, but it remains to be seen whether a buyer will emerge at this price. Or if Mr Ow agrees to a sale.

Mr Tay lists the attractions of the site. “Firstly, such large development sites in GCB Areas are very rare. Secondly, this property is very near the Botanic Gardens. An ultra high networth multi-generation family could build, say, two bungalows on plots of 30,000 sq ft each and retain the rest of the land for lifestyle amenities like a garden, pool or even a tennis court.

“It is also a nice way to land bank for their future generation.”

A seasoned property consultant noted that behind Botanic Lodge, an old bungalow, also with a Lermit Road address, transacted in December 2020 at S$2,000 psf on land area of 17,374 sq ft.

Of course, that was before the record price achieved in Nassim Road this year.

Realstar Premier founder William. Wong estimates that potential buyers of 2 Lermit Road may be prepared to pay $300-S$320 million, or S$3,340 psf to $3,560 psf on land area. “Apart from the Nassim Road deal, there have not been any transactions of redevelopment land in a GCB Area at above S$3,000 psf.”

BT reported recently the Ow family’s sale of two adjoining vacant sites of slightly above 15,000 sq ft each in Chatsworth Road at $2,600 psf, in separate deals in late April this year.

Another reason Mr Wong of Real-star does not see potential buyers of 2 Lermit Road offering as high as $4,000 psf is its huge plot size of almost 90,000 sq ft. “Generally, with a bigger plot size, the psf price tends to be lower, for most buyers,” he noted.

“Nevertheless, Lermit is just the next lane to Nassim; it may be possible to reach as high as $3,500psf,” he added.

Said Mr Wong: “Two years ago, the number of potential buyers looking at such high-quantum plots would likely have been three to four. Now we may see as many as 10 prospective buyers who may be keen to explore.”

These include local billionaires and newly-minted citizens. “Some developers are also keen, but these are not the typical GCB developers we have seen in the past. Instead, we have come across, for example, groups that have built malls and hotels overseas but are now keen on developing GCBs for sale. Some of these groups could be tapping funds from other investors.

“They can see the potential demand for big-ticket homes even reaching up to S$80-100 million for a brand-new residence —- as more UHNWIs are relocating to Singapore.”

While it is possible to redevelop the existing property into a new apartment development, there are limitations. For one, the gross floor area for the new project cannot exceed the existing approved GFA for Botanic Lodge.

Secondly, there will be a two-storey height limit for the project as it is within a GCB Area that is in the vicinity of the Botanic Gardens.

Given the hot demand for GCBs with big land plots, analysts say it would make more sense to turn this site into a bungalow development.

Mr Wong of Realstar said: “Going by the latest trend, it seems that demand for bungalows in GCB areas with plot sizes of around 20,000 sq ft or more is gaining traction. That being the case, developing four bungalows for this plot would be ideal.”

List SIR’s analysis of URA Realis caveats data shows that year to date (with the latest transaction dated June 3), there have been 46 deals in GCB Areas totalling $1.28 billion. In comparison, for the whole of last year, there were 46 deals amounting to S$1.09 billion.