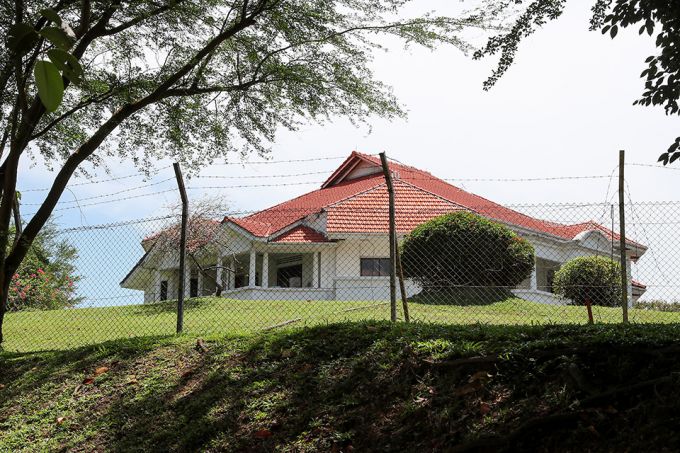 A PLUM freehold landed residential site in District 9 is expected to be put on the market in a few months.

The plot, at 5 Oxley Rise, has a land area of 117,230 sq ft. It is owned by seven members of the Cheong family, all sons of Hong Fok Corporation and Tian Teck group’s late founder Cheong Eak Chong. Tian Teck group is one of Singapore’s oldest developers; among other properties, it developed International Plaza in Anson Road.

Industry watchers believe the vendors may have in mind an asking price of above $250 million.

On the site is a two-storey bungalow. Its last resident was matriarch Lim Ghee, who died in February.

Under the Urban Redevelopment Authority’s Master Plan 2019, the site is zoned for residential use (two-storey mixed landed).

Using a back-of-the-envelope calculation, assuming that about 20 percent of the site area needs to be set aside for roads and an electrical substation, and based on minimum plot sizes stipulated by the planning authority for conventional landed homes, the plot could yield up to 21 bungalows.

Alternatively, if an all semi-detached housing development were to be built, the site could hold about 42 homes. If terrace houses are built, there will be space for more than 50 of them.

Market watchers say it is unlikely that a development charge is payable to the state,

Under two-storey mixed landed use, a strata landed development may also be allowed. This could take a single form (for example, all strata terrace houses), or a mix (say, a combination of terrace, semi-detached and bungalow units).

“This is because the guidelines limit the number of units that can be built by imposing that only 40 per cent of the site area (applicable outside Good Class Bungalow Areas) can be used to determine the maximum number of units, using a footprint of 100 sq m for both terrace and semi-detached and 200 sq m for detached.”

For the site, Mr Lee estimates that the maximum number of strata detached is only 21 units or 43 units of a mix of strata terrace and semi-detached. “So the maximum number of units you can build under a strata landed scheme is roughly the same as that for a conventional landed scheme, But conventional landed homes sell at a much higher price than strata landed homes.”

A property investment group chief executive suggested the possibility of extracting higher intensity from the site, subject to approval by the authorities, “Surrounding developments such as Oxley Garden, Belle Vue Residences, Orchard Court and Oxley Mansion all have residential zoning with 1.4 plot ratio. Of course, this would in all likelihood require payment of a development charge,” he said.

The owners of 5 Oxley Rise are said to be engaging an architectural firm to look into the property’s redevelopment potential.

The site is expected to be made available for sale either through expression of interest or tender exercise. CBRE is understood to have been appointed the exclusive marketing agent.

The attraction of the site is that it is a rare, sizeable freehold residential plot on elevated ground – located in a prime residential district near the Orchard Road shopping belt.

Besides local and foreign residential developers, the property may also draw ultra-high-net-worth families eyeing land to build a mansion, or a few bungalows for multi-generational living, say observers.

The seven also own the private road (with a land area of 33,975 sq ft) which provides access not only for 5 Oxley Rise, but also the residents of Oxley Garden.