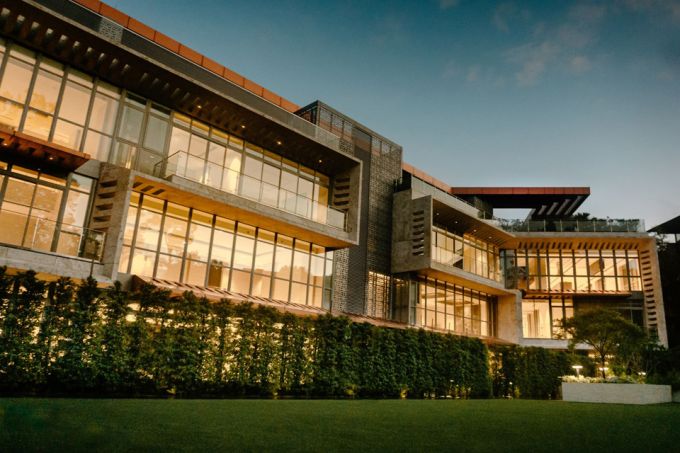 The largest of its 4 duplexes spans a sprawling 13,000 sq ft, while the other 3 units occupy 7,384 sq ft to 8,536 sq ft. Each duplex has a private lift, its own swimming pool, and car park lots, with extensive use of imported travertine. PHOTO: ARCADIA CONSULTING

AN ULTRA-LUXURIOUS 4-unit complex in the Nassim enclave, originally developed for motoring tycoon Peter Kwee’s family use, has been put on the market with target asking prices of around S$6,000 per square foot (psf) on average.

Speaking to The Business Times, the developer, De Nassim, and the appointed agency, Arcadia Consulting, said the intended buyer profile for the 49 Nassim Road project “comprises mainly foreigners, permanent residents and locals, in that order”.

Indonesian, mainland Chinese, Hong Kong, Indian and European clients are among those keen to view the units at 49 Nassim, which is also known as Nassim Quattro. “A couple of Singaporeans have shown interest, but I’d say local buyers form the minority for this project,” Leong noted.

The freehold development, bedecked with travertine, sits on about 45,000 square feet (sq ft) of elevated land. The triangular plot has a gentle slope.

The residences can be combined to form even larger units. For instance, a single buyer may live in a combined unit spanning about 21,000 sq ft as the primary residence while using the other 2 duplexes for work, entertainment and guest accommodation.

Leong said the units come with double-height living and dining spaces, and occupants will feel as if they are living in a landed house surrounded by verdant gardens.

“In an exclusive address like Nassim, opportunities to acquire an entire development are rare,” he noted. Spacious, new projects with immediate move-in availability and in a coveted location are also few and far between. He pointed out that the development sits on one of the last few large plots along Nassim Road.

“With demand for such properties on the rise from ultra-wealthy buyers and investors, the developer feels the timing is right for us to very selectively show 49 Nassim to the right profile of prospective buyers,” Leong said.

Recent launches aimed at the super well-heeled may provide a reference point for 49 Nassim’s pricing, which will be provided on application. At Les Maisons Nassim, a 6,577 sq ft unit was sold at S$39 million and a 6,049 sq ft unit went for S$35 million. They translate to S$5,930 psf and S$5,786 psf respectively. “Based on these prices, the smallest duplex in Nassim Quattro could fetch more than S$42 million,” Leong said.

Asked about the cooling measures introduced on Dec 16, 2021, Leong said the new curbs should keep exuberant buying of multiple properties in check, ensuring sustainable housing price growth and affordability for those who need a roof over their heads. But the trend of the ultra-affluent spending large sums on their primary residence will likely continue.

“Apartments in Singapore are transacting above S$30 million and up to S$75 million. We’ve observed extremely rich buyers, with investible assets of at least S$250 million, investing in properties priced over S$100 million each in Hong Kong. With the right real estate products, Singapore will be able to satisfy the needs of this niche segment of astute buyers,” Leong said.

Purchased in the late 1980s by Peter Kwee, the property was then known as Nassim Gardens, a 3-storey block with 10 apartments.

It was launched for sale via tender in March 2006 with an indicative price of S$30 to 32 million, although a deal did not materialise.

De Nassim was thus incorporated in 2007 to buy over Nassim Gardens and redevelop it. The initial plan was to find just 1 or 2 buyers for the new project while the Kwee family would live in the other units, and so a preview was held.

But in 2013, it was withdrawn from the market when Peter Kwee decided the entire complex would house the extended family, too. “However, eventually we did not move in because my children decided to stay put where they are currently putting up,” he said.

Given that 49 Nassim had been meant for the family’s own use, the developer was fastidious about the design and choice of materials.

For example, the building is informally dubbed “The Travertine House” due to the extensive use of the natural stone. “Our family likes travertine marble, so we went all the way and decked the entire project with imported travertine. Every exposed wall and flooring, both interior and exterior, is covered with it,” Peter Kwee said. Each piece must be treated with special chemicals to protect them when used outdoors, and to give them a warm lustre if laid indoors.

“If we had built it with the intention to sell, we may not have gone to such an extent,” he added.

De Nassim also created a garage big enough to accommodate at least 12 cars, making it ideal for car aficionados as it can double up as a display area for a luxury collection.

Besides 49 Nassim, Peter Kwee has focused on either redeveloping or making enhancements to Good Class Bungalows (GCBs). He looks for opportunities in prime districts or unique properties to which the team can add value.

One of his investments was a terrace house along Jalan Elok; the property received a facelift that went on to clinch several design awards. Other properties he has worked on include a GCB at Tanglin Hill that was rebuilt from scratch, and a house along Gallop Park that underwent major improvement works to refresh its neoclassical design with a contemporary feel.

Peter Kwee told BT: “As property development is not our core business, we are opportunistic with our acquisitions. We consolidate our sales proceeds, and if we see something nice we can add value to, we will acquire it… Golf is something we’re passionate about. Who knows, we may look into developing luxury properties around golf courses in the future.”

Asked whether any of the sales proceeds from 49 Nassim might be applied towards payments owed to noteholders of the Laguna National golf and country club, he said the 2 matters are strictly unrelated.

Shophouses at Lavender, Geylang up for sale by tender, expression of interest