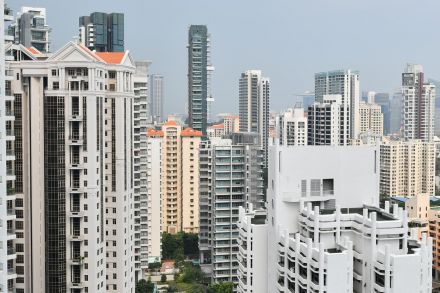 The private housing market is expected to maintain its positive momentum for the rest of the year, after developers chalked up fairly healthy sales in August despite limited new launches and heightened restrictions to combat the pandemic.

1,215 new private homes were moved in August, nearly 24 per cent lower than July’s take-up, though analysts pointed out that July’s sales had notched a six-month-high, underpinned in part by blistering demand for Pasir Ris 8. The sales figure for August “is still above the 10-year monthly average of 990 units, demonstrating continued strength in demand for homes,” said CBRE’s head of research (South-east Asia), Tricia Song.

Another factor cited for the slower sales month-on-month was the fewer number of residential projects launched. Among the launches was the month’s top seller, 99-year-leasehold The Watergardens at Canberra, and freehold, 138-unit Klimt Cairnhill, which sold one unit last month at S$3,818 per square foot (psf).

Buyers also appeared unfazed by the Hungry Ghost Festival in August, typically a quiet period for the property market. Mark Yip, chief executive of Huttons Asia, highlighted that sales crossed the 1,000 mark in a better showing than last year’s Hungry Ghost month – suggesting that buyers are probably less concerned nowadays about signing on the dotted line.

Compared to 2020, sales of new private homes were marginally, or nearly 3.5 per cent, lower in August compared to the 1,258 units moved by developers in the corresponding month a year ago.

Of the 1,215 units sold in August this year, nearly 60 per cent were located in the suburbs, which tend to be more affordable. Cushman & Wakefield’s head of research, Wong Xian Yang, observed that buyers continue to scour for attractively priced projects in the suburbs and city fringes. He said: “Around 75 per cent of the total developer sales in August were priced lower than S$2,000 psf.”

Size also appears to matter to buyers. Lam Chern Woon, Edmund Tie’s head of research & consulting, noted that the median sizes of new homes in the core central region (CCR) and rest of central region (RCR) sold in Aug remained above the year’s median size figures of 657 sq ft and 732 sq ft respectively, suggesting “continued robust demand for larger spaces that can facilitate work-live-learn-play uses.” This comes as a resurgence in Covid-19 cases in Singapore has kept many employees working from home.

Last month, 836 units were launched for sale, of which 296 were in the CCR, 140 in RCR and 400 were in the Outside Central Region (OCR). In comparison, this is down 24 per cent from the 1,104 homes launched for sale by developers in July. Meanwhile, the number of homes released in August this year was 47 per cent less than the corresponding period in 2020.

The top seller in August was The Watergardens at Canberra which sold 267, or nearly 60 per cent, of its 448 units at a median price of S$1,469 psf, supported by demand from HDB upgraders. “The median launch price…was the lowest among major residential projects launched in more than two years,” pointed out JLL’s senior director (research & consultancy), Ong Teck Hui.

Looking ahead, Colliers’ senior associate director (research) Shirley Wong expects the overall momentum of the housing market to remain positive in tandem with a recovering economy. She said: “We expect to see stronger buying power, despite potentially fewer new launches. As such, demand could overflow to ongoing launches or the secondary market.” Colliers expects private home prices to rise 6 per cent for the full year.

Meanwhile, Knight Frank’s head of research, Leonard Tay, expects that the eventual introduction of additional vaccinated travel lanes could spark demand from foreign buyers. He said: “When more travel corridors can be established without prohibitive quarantine protocols, it is likely that foreign homebuyers will enter the fray towards the end of the year, contributing further to sales volumes, perhaps for the luxury class of homes in the CCR.”

The figures – which were released by the Urban Redevelopment Authority (URA) on Wednesday – exclude ECs, which are a public-private housing hybrid. Including ECs – although there were none launched in August – developers moved 1,322 units, 24 per cent lower than the 1,746 new homes sold in July and about 1 per cent higher than the 1,309 units sold in August last year.

Christine Sun, OrangeTee & Tie’s senior vice-president (research & analytics), said: “Developers are likely to step up their project launches after the Hungry Ghost month, which could help boost sales in the coming weeks.” Upcoming launches include the 696-unit CanningHill Piers at River Valley Road and the 230-unit Perfect Ten at Bukit Timah Road.

With a lack of big launches this month as well, Huttons projects new home sales for September could ease to around 700 to 800 units, while PropNex puts the figure at 800 to 900 units.

Including August, the tally for new private residential sales has clocked 9,265 units for the first eight months of this year. Analysts generally expect full year sales to range from 11,000 to over 12,000 units for 2021 as a whole, soundly surpassing the 9,982 units moved by developers last year. ERA’s head of research & consultancy Nicholas Mak flagged, however, that downside risks include further cooling measures or another circuit breaker amid the rising number of Covid-19 cases.

Prime public housing subject to 6% clawback upon resale; 960 such flats in Rochor among 4,501 BTO flats launched