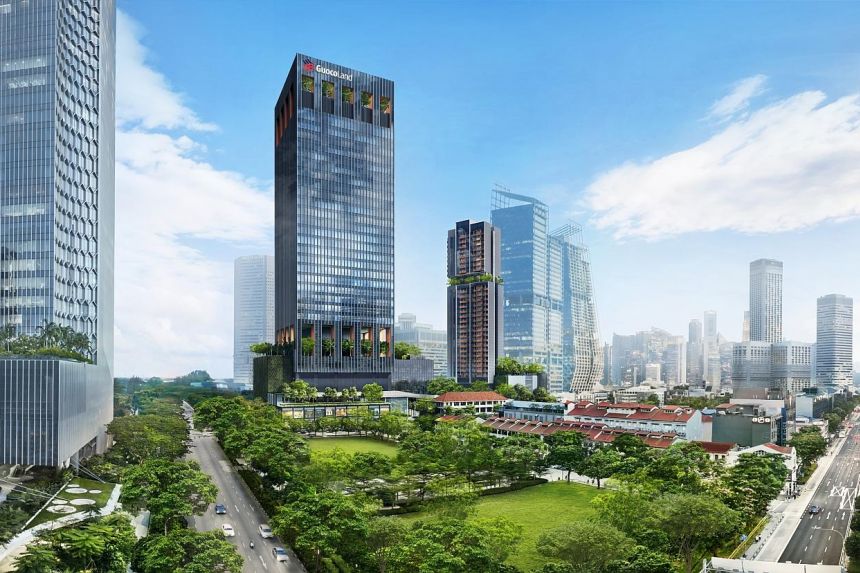 The condo – Midtown Modern – will be part of a larger development known as Guoco Midtown II announced yesterday.

Together with the 33-storey, 219-unit Midtown Bay that was launched last October, the two condo projects will offer more than 700 luxury units.

About 30 per cent of the 219 one-to three-bedroom duplexes at Midtown Bay have sold at prices ranging from $1.3 million to $3.8 million, the developer said. Details on the Midtown Modern launch will be announced at a later date.

Guoco Midtown – the largest project under development in the Central Business District – also includes a 30-storey office tower with 770,000 sq ft of premium Grade A space, three retail clusters and a Network Hub. This will be an 80,000 sq ft members-only business and social club that consists of private office suites, networking lounges and meeting and conference facilities.

GuocoLand Singapore managing director Cheng Hsing Yao said: “Guoco Midtown was conceived with a vision of how people will work, live and play in the future. Part of that future has arrived much sooner.”

He noted that the development serves as a blueprint for a post-pandemic development.

“Work from home is not a new phenomenon, but a phenomenon that was gaining strength prior to Covid-19,” said Mr Cheng. “When we conceived Guoco Midtown, we were already looking at this emerging trend, and the blurring of lines between live, work and play, which means office spaces also need to incorporate the recreation element.

“This is not going to be the last shock to the economy. We have to focus on creating a product that will be future-ready.”

As with most projects, construction activity on the site has not returned to pre-Covid-19 levels given that stringent safety measures are still in place.

“Our site reopened two weeks ago after being closed for about four months,” Mr Cheng told The Straits Times yesterday.

“More than half our construction workforce has returned, so we are ramping up our pace.

“But during the past few months, we have been doing construction coordination virtually for the entire project, which means that once we start building the real thing, it will be more productive.

“Building a workers’ dormitory on site helps improve productivity because it eliminates travelling and we have better control on managing our workers’ health.”

The multibillion-dollar project is expected to be completed in phases between 2022 and 2024.

GuocoLand has made some small adjustments to the office development in the light of the pandemic, but remains largely optimistic.

“Most companies will likely make work from home part of their strategy, but it doesn’t mean companies don’t need offices any more,” noted Mr Cheng.

The location of the office will also become more important, he added. “Even when companies downsize, they may also move, but they will place more focus on the quality of the office. When you have to choose only that one office, albeit a slightly smaller one, you have to make it more meaningful.”

To that end, Guoco Midtown’s “core and flex” concept, which provides both long-term dedicated office space and shorter-term offices, can offer companies more flexibility and cost savings, he said.

“The economic environment has become more uncertain. It’s hard for companies to project how many people they need, so the core and flex concept has been shown to be relevant now,” said Mr Cheng.

Shophouses on Baghdad Street, Telok Ayer area up for sale