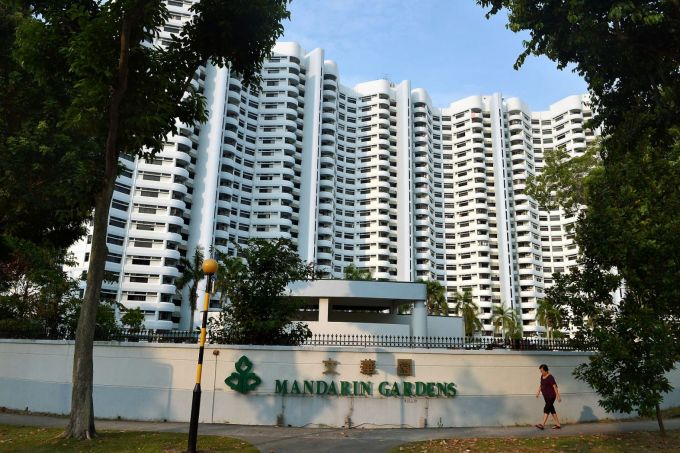 SOME owners at the sprawling Mandarin Gardens, which houses more than 1,000 units, are again eyeing an en bloc sale of the 99-year leasehold condominium as the market regains momentum.

The mega development, near East Coast Park, formed a collective sale committee (CSC) on Sunday (Dec 5), and will soon select the committee chairman and other key positions, Lianhe Zaobao reported on Wednesday (Dec 8).

Its previous attempt in 2018 came to naught when the CSC then failed to obtain enough signatures to launch a tender.

That was despite the committee having increased the reserve price twice. It was raised from an initial S$2.48 billion to about S$2.79 billion when the CSC discovered that the 1.07 million square foot (sq ft) land parcel was undervalued by more than S$300 million, and later to around S$2.93 billion to persuade more owners to give their consent.

If the deal had been successful, those eye-popping price tags would have made Mandarin Gardens the biggest en bloc transaction by dollar value in Singapore. However, when the collective sales agreement expired on Mar 24, 2019, it won the support of only 68 per cent of unit owners, less than the requisite 80 per cent mandate.

The condominium’s renewed en bloc bid this time round will thus tread a fine line between sweetening the reserve price sufficiently to garner support from more homeowners, and finding willing buyers for the big-ticket sale.

In November 2018, The Business Times reported that market watchers were expecting interest from a consortium of developers – be it local or foreign – because it would likely be difficult for developers to take on such a hefty deal single-handedly.

Lee Nai Jia, deputy director of the Institute of Real Estate and Urban Studies at the National University of Singapore, told Lianhe Zaobao this week that given the recent rise in private home prices, some Mandarin Gardens unit owners may now expect greater profits from the collective sale in order to purchase their next homes.

Previously, with the final S$2.93 billion reserve price, the owners could have each received between S$1.9 million and nearly S$6 million, depending on the unit sizes, The Straits Times reported in 2019. The condominium’s 1,017 units range from about 732 sq ft to 3,800 sq ft.