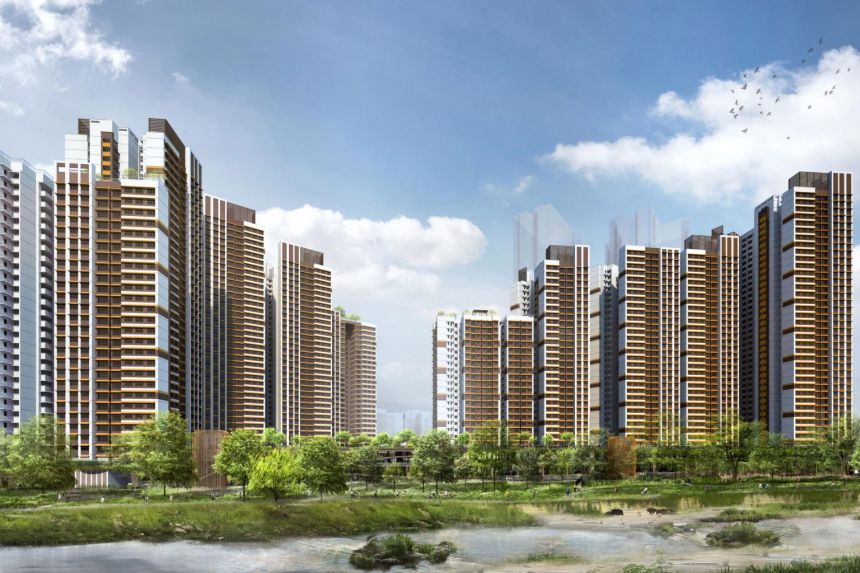 A total of 5,795 Build-To-Order (BTO) flats spread across seven housing projects in five estates were launched for sale by the Housing Board yesterday in the final sales exercise for the year.

HDB reminded the public that the sales exercise is on for a week until next Monday, and that successful applicants will be determined by a computer ballot, and not on a first come, first served basis.

The exercise’s biggest project is the Bishan Ridges, where 1,502 two-room flexi, three-room and four-room flats are on offer.

The site in Bishan Street 14 is next to the Kallang River and about 400m, or a five-minute walk, from Bishan MRT station.

Prices are slightly higher than those of the 472 units in Bishan Street 11 launched in the August BTO sales exercise, likely due to the project’s proximity to the MRT station. Prices for the August exercise were from $302,000, without grants, for a three-room flat and $484,000 for a four-room unit.

The estimated completion date is the second quarter of 2026. When The Straits Times first reported on the flats in October last year, before the Covid-19 pandemic hit, the flats were due to be ready by 2025.

Besides Bishan, the other flats are spread across the mature towns of Toa Payoh (Bidadari) and Tampines, and the non-mature towns of Sembawang and Tengah.

In Toa Payoh (Bidadari), there are two BTO projects. The smaller one is ParkView @ Bidadari, where some 358 three-room and four-room flats are located next to the upcoming Alkaff Lake and within walking distance of Woodleigh MRT station.

The other is Bartley Beacon, with 880 three-room, four-room and five-room flats on a site next to Maris Stella High School and within walking distance of Bartley MRT station.

Five-room units in Bartley Beacon start from $627,000, making them the most expensive flats in this launch.

The estimated completion dates for ParkView @ Bidadari and Bartley Beacon are the first and second quarter of 2025 respectively.

In Tampines, 750 two-room flexi, four-room and five-room units are on offer at Tampines GreenEmerald, on a site bounded by Bedok Reservoir Road and Tampines Street 96.

There are two housing projects in Tengah, both within the Garden district.

These flats will be the earliest to be ready in this launch – around the first quarter of 2024.

In addition, another 5,220 flats are on offer in this year’s first Sale of Balance Flats sales. The exercise, typically held in May, was delayed due to the Covid-19 pandemic.

These flats are spread across mature and non-mature estates such as Marine Parade, Queenstown, Clementi, Punggol and Sengkang.

This BTO sales exercise comes after a combined sales exercise in August, where bigger flats in Geylang and Ang Mo Kio were oversubscribed by 14 and 10 times respectively.

PropNex chief executive Ismail Gafoor expects the flats in Bishan and Toa Payoh (Bidadari) to be the most hotly contested as they are located in the city fringe and are close to popular schools.

However, it remains to be seen whether an upcoming funeral parlour complex – slated to be completed in 2025 – near the sites in Toa Payoh (Bidadari) might deter some prospective home buyers from applying, he added.

In total, HDB has launched 16,752 BTO flats this year, along with another 1,298 flats for open booking that are available all year round.

In February next year, HDB will launch some 3,500 flats in Bukit Batok, Tengah, Kallang/Whampoa and Toa Payoh (Bidadari).

Another 3,800 flats will be offered in Bukit Merah, Geylang, Tengah and Woodlands next May.