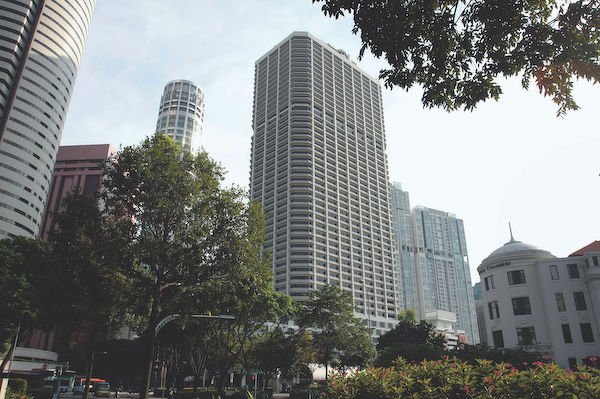 International Plaza in Tanjong Pagar is set to embark on its first mixed-use collective sale attempt that could potentially smash records in terms of unit numbers and value.

The 50-storey leasehold commercial-cum-residential building – one of Singapore’s biggest integrated developments – hit the 80 per cent threshold in July to start the launch of its first collective sale attempt, Ms Swee Shou Fern, executive director of investment advisory at Edmund Tie and the building’s marketing agent, told The Straits Times.

A virtual meeting with the owners later this month will provide information on the sale proposal and process.

Ms Swee declined to disclose the reserve price on Thursday but said a sale by public tender will be launched soon.

The block built in the 1970s comprises 209 residential apartments, 559 office units, 192 strata shops, a privately held carpark and a swimming pool on the 36th floor. The property, which is zoned for commercial use, has a land area of about 0.7ha and 48 years left on the lease.

It was developed by the Cheong family, who are related to the Cheongs who control Singapore-listed Hong Fok Corp.

International Plaza comes under the Central Business District Incentive Scheme, which allows qualifying properties to intensify their gross floor area by 25 to 30 per cent, depending on the proposed land use.

Owner sign-ups for the collective sale began in October 2019 and was supposed to be wrapped up by last October, but it took a further 10 months due to the pandemic.

International Plaza was among several sites granted extensions by the Ministry of Law for their sale deadlines under measures implemented last year. It was given an extension until Aug 10 but reached the 80 per cent ahead of time.

Collective Sale Committee chairman Kevin Liang said getting the mandate was a “mammoth and complex task for our development with close to 1,000 strata units”.

“Given our prime location within the CBD, we are expecting keen interest from local and foreign developers and funds,” he added.

Ms Swee said: “The redevelopment of International Plaza is the last piece in the jigsaw puzzle in the rejuvenation of the Tanjong Pagar precinct. We eagerly anticipate novel and interesting development concepts that will be brought to the table.”

It is also near AXA Tower, which will be redeveloped by a Perennial Real Estate-led consortium of investors and Alibaba into a development with commercial retail, office, hotel and residential use.

The ST reported in November 2018 that International Plaza had been looking to launch a collective sale at about $2.6 billion. This was before the appointment of its marketing agent in the first quarter of 2019.

Despite the likely big price quantum, Savills Singapore executive Alan Cheong believes that International Plaza “can find a buyer because there is a lot of liquidity in the system”.

With the residential and commercial en-bloc markets starting to show signs of heating up, some analysts say this collective sale will be closely watched for how land hungry developers are.

Already, an unnamed developer has undertaken to bid at least $1.508 billion for a government land site in Marina View in June. The white site is intended for a mixed-use development with residential, hotel, commercial and/or serviced apartments.

Cushman & Wakefield noted that the largest commercial en-bloc sale in the past five years was 52-year-old Maxwell House, which reaped $276.8 million in May. The commercially zoned building at 20 Maxwell Road hit the market at a reserve price of $295 million last September but that was lowered in April.