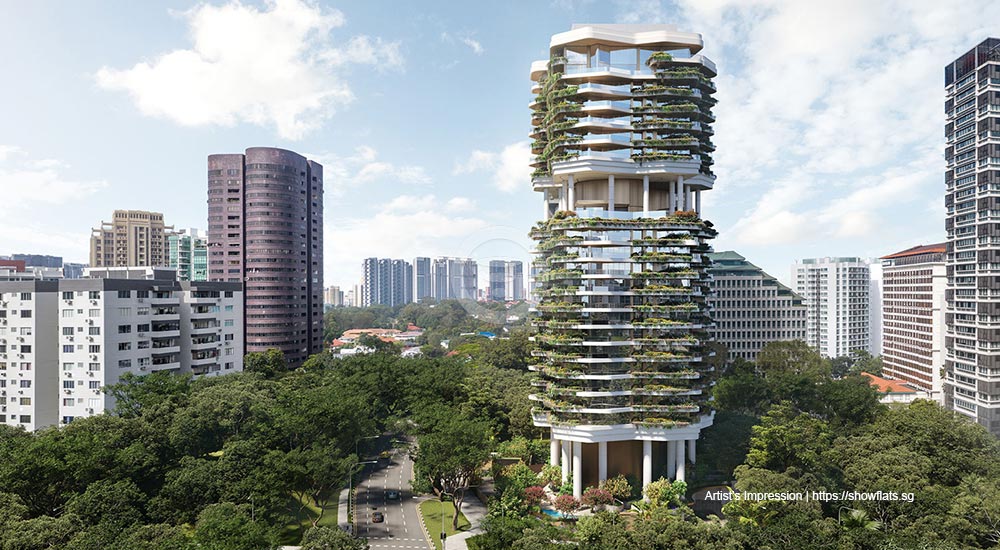 Located in prime District 10, the super luxury freehold development at 18 Tomlinson Road has 54 units in the 21-storey residential tower. The units range in size from 1,432 square feet (sq ft) for a two-bedroom plus study to 5,899 sq ft for a penthouse.

The showflat will be open for pre view on May 1, and is by appointment only, the developer said.

The Hong Kong listed conglomerate acquired the site (formerly Park House) via collective sale with an aggressive bid of $375.5 million, it was reported in mid-2018. This worked out to $2,910 psf ppr.

Nicholas Mak, head of research and consultancy at ERA Realty, said: With their maiden residential project, Shun Tak appears to be branding themselves in the super high-end segment, given the location and the size of the units.” ERA is one of the marketing agents for the project.

Mr Mak added: “The project could see a higher than usual proportion of foreign buyers (including PRs) where over 30 per cent of the buyers could be foreigners.

Analysts said that Shun Tak’s network — as well as its track record in China, Hong Kong and Macau should help attract buyers from North Asia.

Savills’ executive director (research & consultancy) Alan Cheong reckons the timing to launch the project is opportune since momentum has been building for the super high end segment of the property market.

Noting the improved segment, Mr Lam said it isa fairly good time for the developer to push ahead with the launch, should a second wave of Covid-19 cases or property cooling measures crop up later.

Mr Lee said: “In our view, there is currently a dearth of supply of such units in the market and Park Nova will certainly fill that gap. Despite the border control measures, we are quite confident there would be sales at Park Nova. There are enough buyers, including Chinese buyers in Singapore, to create demand.

One market watcher suggested that Park Nova units could be offered for sale upwards of $$4,200 psf. while Mr Cheong put the figure at likely over $4,500 psf. PropNex projects that prices could “hover around the $5,000 psf” range, citing the project’s luxe finishings and other trans actions in the area,

Other projects for sale in the vicinity include the 154-unit Boulevard 88; 77-unit 3 Orchard By-The Park; and 96-unit 3 Cuscaden.

According to Shun Tak’s FY19 annual report, Park Nova was initially scheduled for launch in 2020 before the pandemic struck.

Market watchers suggested that the pandemic and the impact on construction activity, coupled with the property cooling measures back in July 2018, could have pushed the launch into 2021.

Shun Tak first announced it was acquiring the site back in June 2018, weeks before the Singapore government rolled out cooling measures which resulted in a softening in the property market. Then, its founder, casino tycoon Stanley Ho, died in May 2020.

Savills’ Mr Cheong reckons that Shun Tak could have also been taking time to fine-tune the architectural plans.

Pansy Ho, managing director of Shun Tak, said: “We have been exploring investment opportunities beyond our home base of Greater China, with the acquisition of two residential projects and one commercial development. Our confidence in the Singapore market is at an all-time high and we are paving the way for future developments in the region.

Park Nova, slated for completion in 2023, is within walking distance of Orchard Boulevard MRT station on the Thomson-East Coast line, and close to Orchard Road and the Botanic Gardens. Facilities include a clubhouse, swimming pools, a gym and a sky terrace

Not far from Park Nova, Shun Tak is developing the 14-unit luxury Les Maisons Nassim in the posh Nassim Road area as well as developing No 9 Cuscaden Road into a five-star hotel with at least 142 rooms.

According to Shun Tak’s FY20 interim report, Les Maisons Nassim is expected to be launched in 2021 and completed in 2022.

Due to the pandemic, construction of the hotel “is expected to be delayed by approximately six months, with completion expected in early-2022 and planned opening in mid-2022,” Shun Tak said in the interim report, adding that the hotel will be managed by the Artyzen Hospitality Group.

NEW Property Workshop by CEO Ismail Gafoor: Price of OCR Properties – What to expect in 2022?

Units at CanningHill Piers along Singapore River priced at S$1.16m and above; more VTLs may spur demand