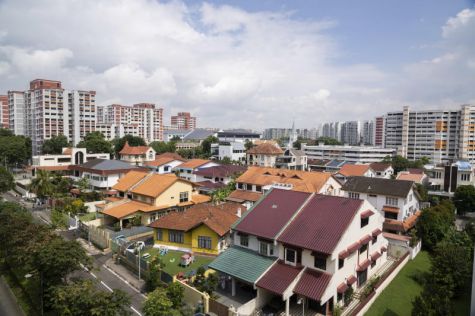 Home rentals jumped 7.1 per cent in the first 9 months of 2021, thanks to a drop in vacancies, MAS said in its Financial Stability Review this month.

[SINGAPORE] Singapore residents bemoaning expensive home prices now have something else to worry about: rising rents. Rents have jumped to a 6-year high, and analysts anticipate further increases as demand outweighs supply.

That’s adding to costs for residents of the financial hub, especially expatriates, at a time when inflationary pressures are building. The Covid-19 pandemic can be blamed for much of the gains: a shortage of migrant workers has contributed to construction delays, forcing people to lease while waiting for apartments to be built.

Younger Singaporeans have been moving out of the family home in search of more space to work remotely. And homeowners returning from stints abroad are taking back their units, reducing the rental stock and pushing tenants into the market.

“At the beginning of the pandemic, people expected a high probability of deflation setting in,” said Alan Cheong, executive director of research at Savills. “But who would have anticipated the opposite, an endemic inflation that’s now the talk of the town.”

Apartments costing S$2,500 to S$4,000 in monthly rent may face the greatest upside pressure amid high demand, Cheong said. This year alone, some units have already seen rental growth of at least between 10 per cent and 15 per cent.

The central bank has also sounded caution. Home rentals jumped 7.1 per cent in the first 9 months of 2021, thanks to a drop in vacancies, the Monetary Authority of Singapore said in its Financial Stability Review this month.

While supply is still somewhat adequate, “further declines in the vacancy rate could trigger a sharper increase in rentals,” the central bank said. An index of rental prices jumped to 111.3 in the third quarter of 2021, the highest since the first 3 months of 2015, Urban Redevelopment Authority figures show.

Singapore is tied with Paris as the world’s second-most expensive city, according to the Economist Intelligence Unit’s cost of living rankings for 2021. The South-east Asian nation also has one of the priciest property markets.

A surge in home prices and sales prompted authorities to impose a new round of cooling measures earlier this month, mainly targeting purchases by investors and foreigners.

Unlike other global financial centres like New York and London, residents of the tiny island haven’t had the choice to move to the countryside to ride out the pandemic. That means rental demand has stayed high, allowing landlords to increase fees.

Expatriates in the city-state are being hit the hardest given that many of them prefer private apartments, said Christine Sun, senior vice-president of research and analytics at OrangeTee & Tie.

While they can rent public units, most still choose to go private because of the amenities such as swimming pools and tennis courts, as well as closer proximity to their workplaces in the city centre.

Purchasing a home in Singapore is becoming more costly for foreigners after the government hiked stamp duties as part of the new cooling steps. Some expats who recently relocated to the city are staying put in serviced apartments for now while scouting for good rental deals.

Others, like American national Shiv Sharma, are looking to just swallow the price hike. The senior executive at Stocktwits – a social media platform for investors – who’s been residing in Singapore for 2 years, was told by his real estate agent last month to expect a “significant rent increase” when he renews his lease in March.

“The issue is my wife is pregnant and is due in February. So, it’d be tough to move around with a newborn,” Sharma said. “If that wasn’t the case, I would 100 per cent look for a better deal elsewhere if the rent of my current place is raised.”

Going into the new year, analysts expect rental supply to remain tight. Building delays are likely to persist as Singapore curbs the flow of migrant construction workers amid uncertainty over Omicron.

“For 2022 and possibly 2023, we do not expect the leasing market’s rhythm to return to anywhere near where it was before the pandemic struck,” Cheong said.