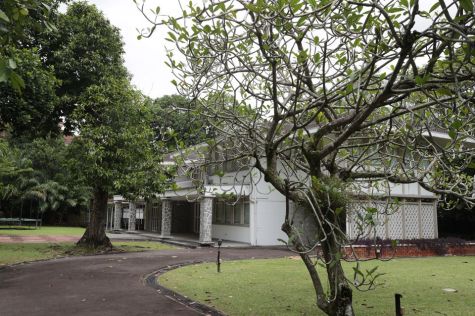 AFTER a blockbuster year, the volume of bungalow deals in Good Class Bungalow (GCB) Areas is set to ease in 2022 as much of the supply available for sale has been taken off the market following the strong sales momentum between the fourth quarter of 2020 and Q3 2021.

Observers do not see the latest cooling measures as having much impact on most GCB buyers.

One generally has to be a Singapore citizen to be allowed to buy a landed property in a GCB Area.

Savvy, ultra-high-net-worth (UHNW) citizens typically ensure that their GCB purchase is counted as their first residential property here and hence not liable for the additional buyer’s stamp duty (ABSD), which has been raised for Singaporeans buying their second and subsequent residential properties. 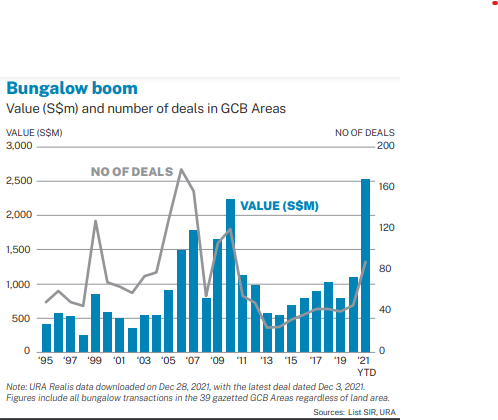 Prices in GCB Areas are still expected to appreciate in 2022, albeit at a slower pace, fuelled by continuing strong sources of demand.

These include successful new economy entrepreneurs and chief executives, well-heeled local families buying for the next generation, and other categories of people who have enjoyed an uplift in wealth (including those riding the cryptocurrency wave), said Newsman Realty managing director KH Tan.

“Many new citizens are still in the market for a GCB,” he added.

Carin Puah, senior director of capital markets at JLL, said: “Most GCB sellers are unlikely to adjust their prices downwards as GCBs are status symbols and a property asset class on its own in Singapore; these owners will divest only if the price meets their expectation.”

GCBs in sought-after locations such as near the Singapore Botanic Gardens and with strong attributes (such as being located on elevated sites with wide road frontage) will continue to draw suitors, said Ms Puah. “With most sellers continuing to raise their price expectations, buyers may not readily give in and deals may take a longer time to negotiate due to the mismatch in price expectation.”

Observers expect fewer new listings – and, even then, at higher prices.

While things may be a little slow for the next 3 months and the number of deals in 2022 unlikely to surpass 2021 numbers, Realstar Premier founder William Wong says there is a “good possibility” of the record for per square foot (psf) prices set in 2021 being broken by end-2022.

In March, a new high of S$4,005 psf of land for bungalow redevelopment land in a GCB Area was set by Nanofilm Technologies International founder Shi Xu’s wife, Jin Xiao Qun, for her purchase of an old bungalow in Nassim Road with land area of 32,159 square feet (sq ft); the absolute price was S$128.8 million. (The couple are naturalised Singaporeans.)

In May, news broke of local technopreneur Tommy Ong picking up a freehold bungalow under construction on a 14,843 sq ft plot along Cluny Hill for S$4,291 psf, the highest on a new-bungalow basis in a GCB Area. Ong, who paid S$63.7 million for the property, sold his Singapore-based e-commerce marketing platform Stamped.io to Canada-listed WeCommerce in April 2021 for up to US$110 million.

He is also sanguine about the potential for mega GCB deals of around S$100 million and above in prime areas.

Wong declined to elaborate but sources point to a few candidates that are unofficially on the market in locales such as Ladyhill and Tanglin Hill, among others.

Steve Tay, senior associate vice-president at List Sotheby’s International Realty (List SIR), said: “The potential for mega purchases is high in 2022, especially from naturalised citizens who have been living here with their families for the past few years.

“GCBs on big plots of land with prime addresses provide a rare opportunity for these UHNWs to own a coveted property.”

List SIR’s analysis of URA Realis caveats data downloaded on Dec 28 shows 88 transactions in GCB Areas totalling a record S$2.53 billion year to date (with the latest deal dated Dec 3). These figures are up from the 46 deals adding up to S$1.09 billion for the whole of 2020 and 40 deals amounting to S$782 million in 2019.

Tan of Newsman Realty estimates that in addition to the 88 transactions for which buyers have lodged caveats so far this year, there may be a further 35 deals or so that are not reflected in the caveats data. “This could be due to buyers choosing not to lodge caveats, probably to keep a low profile, or the buyers have not yet exercised the options to purchase. So in all, we could be looking at a total of about 120 transactions in GCB Areas in 2021.

“For 2022, the figure may fall to 45-60 deals – comprising both caveated and non-caveated transactions,” Tan added.

Wong of Realstar estimates that GCB prices in prime areas such as Cluny, Dalvey, Chatsworth and Tanglin have increased about 20-30 per cent in 2021 alone after rising 5-7 per cent in 2020.

“In the not-so-prime areas such as Brizay Park, Old Holland Road, the Binjai and Yarwood areas, prices have climbed about 15-20 per cent in 2021, compared with the 2-3 per cent increase in 2020.”

Wong added that generally for 2022, he expects an increase of about 5-7 per cent in GCB prices.

Newsman’s Tan predicts: “Due to very limited supply, prices in GCB Areas in general will go up a minimum of 10 per cent over the next 12 months.”

That said, his colleague Tay added: “Most sellers have strong holding power and are not in a rush to sell. They will consider selling only if they receive offers at current pricing levels or higher.

“I foresee that many prime GCBs and plots may be re-priced upwards but their owners may choose to be discreet and ask agents to market quietly – or they may even withdraw the properties completely from the market, thus further reducing the supply available for sale.”

Tan of Newsman said that of the potential buyer clients he surveyed following the cooling measures that took effect on Dec 16, a small group said they would wait and see if sellers reduce asking prices. “The majority replied that if they are offered a bungalow or site that they like and at a price that suits them, they would be willing to buy it immediately. They are buying for own occupation and worry that prices will still go up; they are aware that there is very limited supply available for sale.”

The URA has stipulated a minimum plot size of 1,400 square metres (about 15,070 sq ft) as the planning norm for newly-created bungalows in GCB Areas.

However, when these areas were gazetted in 1980, they included some smaller existing sites; these are still bound by the other planning rules for GCB Areas if they were to be redeveloped.

Realstar’s Wong sees increased demand for bungalows in GCB Areas on such smaller plots of land ranging from 8,000 sq ft to 12,000 sq ft. “Those who have missed the boat to buy a GCB this year may switch to such bungalows as the absolute price quantum is more palatable for those with a budget of S$20 million or thereabouts.”

At the other end of the spectrum, GCBs on large plots of at least 20,000 sq ft will continue to be in demand from those with deeper pockets.