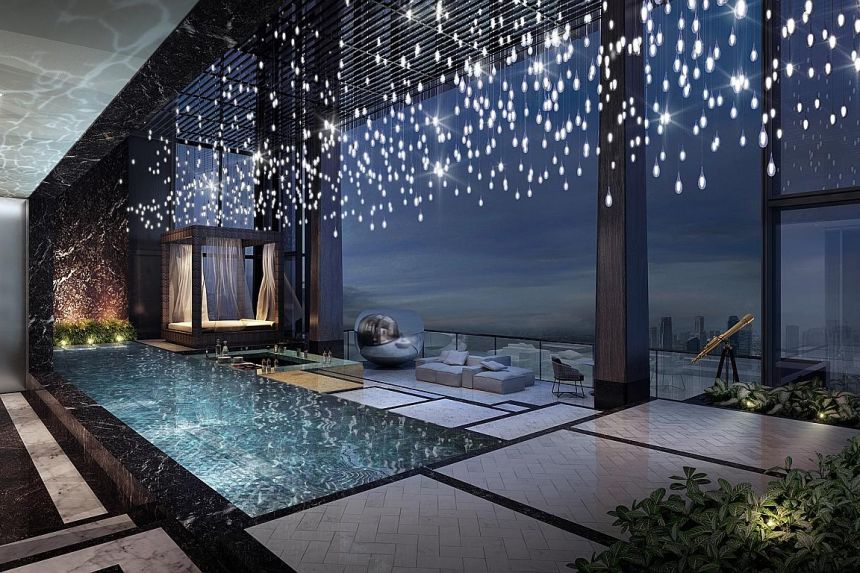 British billionaire inventor James Dyson is selling his luxurious Singapore penthouse atop the city state’s tallest building, his company said yesterday, about a year after buying it for a reported $73.8 million.

Singapore’s tallest penthouse, on the top three levels of the 64-storey Guoco Tower in Tanjong Pagar, is nearly $3,000 per sq ft on the strata area of 21,108 sq ft. It comes with its own infinity pool and private lift lobby from the basement carpark, and has panoramic views of the city, including the Marina Bay waterfront area.

The tycoon’s purchase of the Wallich Residence penthouse last year – after his electric appliance firm Dyson announced that it was shifting its global headquarters to the city state from England – set a record for Singapore penthouses.

A spokesman told Agence France-Presse that an offer had been accepted for the three-floor residence, which also has a 600-bottle wine cellar and a dedicated butler service.

He did not give details of the sale, but it appears that Mr Dyson has made a hefty loss. The Business Times reported that the property was bought by a businessman in the United States for $62 million.

Despite the sale, the spokesman said: “Dyson remains fully committed to expanding its research and development footprint and other operations in Singapore.”

The buyer is Indonesia-born tycoon Leo Koguan, a US citizen and Texas resident. He is co-founder and chairman of IT provider SHI International, BT reported, without citing sources.

The Dysons also bought a bungalow near the Singapore Botanic Gardens last year for $50 million, which they still own.

The company’s move to Singapore prompted fury in Britain that the tycoon – a vocal Brexit backer – was not investing more in British manufacturing.

The firm abandoned plans to produce electric cars last year, saying the project was not commercially viable. Its first vehicle plant was to be located in Singapore.

Mr Dyson, who employs 1,200 people here, told The Straits Times in an interview published on Sunday that Singapore and the new HQ at the iconic St James Power Station will be at the centre of his firm’s growth plans, which include research, development and the manufacture of new technologies.