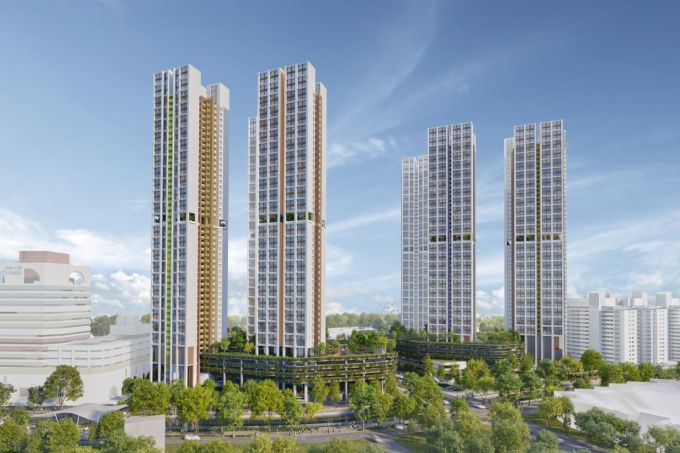 BUYING a Build-To-Order (BTO) flat from the Housing Development Board (HDB) is often a no-brainer for young couples starting on their home-ownership journey. In the November BTO exercise, 4-room flats at Hougang Olive were priced at S$308,000-S$377,000. This represents a discount of about 33 per cent to transacted prices of resale flats nearby of S$460,000-S$560,000, which range from about 7-25 years old.

Buyers of BTO flats enjoy subsidised prices. In addition, some eligible buyers can receive CPF Housing Grants of up to S$80,000.

Those eligible to buy a 4-room BTO flat include couples, where one applicant is a citizen and the other is either a citizen or a permanent resident (PR), whose gross average monthly household income does not exceed S$14,000.

For BTO flat applicants, deciding where to apply can depend on whether one wants to live near parents, the workplace, a popular primary school or a nature park. Perhaps some may wish to apply for a unit in a project which will be ready sooner or where the subscription level is lower.

In the November BTO exercise, applicants had another option to consider of whether to apply for a flat sold under the Prime Location Public Housing (PLH) model.

The 4-room PLH flats at Rochor were the most popular in the November BTO exercise, garnering a subscription rate of 10.3 times. The application rate per unit for first-timers and second-timers exceeded 5 and 100 times respectively.

The PLH model was introduced to keep public housing in prime locations – such as the city centre and surrounding areas – affordable, accessible and inclusive for Singaporeans.

The minimum occupation period (MOP) of PLH flats is 10 years, compared with 5 years for other HDB flats. Even after the MOP period, owners of PLH flats cannot rent out their whole flat.

The resale of PLH flats is ring-fenced for buyers who meet the prevailing eligibility conditions for buying flats directly from HDB. These include having at least one applicant who is a citizen, meeting the monthly household income ceiling of S$14,000, and not holding a private property or having sold any in the last 30 months. Singles above 35 years old cannot buy PLH flats.

As PLH flats are priced with additional subsidies, flat owners will have to return to HDB part of the resale proceeds upon the sale of their homes. Buyers of BTO units at River Peaks I and II have to pay back 6 per cent of the higher of the resale price or valuation when the flats are sold in the resale market.

The keen interest shown in the PLH flats at Rochor probably testifies to the draw of living in a central location and acceptance of the PLH model. For some buyers, who intend to occupy their homes for many years, factors such as a long MOP, restrictions on who can buy the resale PLH units and paying back part of the resale proceeds may hardly matter.

Nonetheless, when buying a home, many people are likely to consider both the consumption and investment angles. Even for buyers who envisage staying in a home for many years, the investment value matters, as a change in circumstances can cause one to possibly sell a home much earlier than originally envisaged.

Purely from a numbers perspective, are BTO buyers right to go for PLH units?

Two factors will depress the potential gains from owning PLH flats. One is the clawback from resale proceeds. More critically, limiting the pool of resale buyers can lower prices.

Assuming a discount of 15-20 per cent for a resale PLH flat versus a comparable non-PLH HDB flat may be reasonable. This approximates the price difference between new executive condos (EC) and private condos.

ECs are built and sold by private developers, and offer features of private condos.

Based on project attributes, River Peaks I and II may be benchmarked against The Pinnacle@

The average price of 16 resale transactions of 4-room flats at The Pinnacle@Duxton over October and November was S$1.01 million.

By applying a 200 per cent increase to the price of a 4-room unit at River Peaks I and II over 17.5 years and then placing a discount of 20 per cent, the gain for a first-time flat owner is around 140 per cent. After repaying 6 per cent of the resale price, the net gain is about 126 per cent.

Financial flexibility is adversely impacted by the long holding period of PLH flats. Greater restrictions also apply to renting out PLH units. Still, based on my simulation, buying a PLH BTO unit at Rochor may yield relatively good capital gains that can be in excess of the rise in the HDB RPI.

Whether due to changing demographics or new infrastructure, price performance can vary across projects sold under the PLH model as well as across BTO units sold in various mature and non-mature estates.

For example, securing a BTO unit in a non-mature estate, which re-rates substantially, could possibly yield a higher percentage gain than buying a PLH unit.

Ultimately, given the over subscription across all the 4-room and 5-room units in the recent BTO exercise, those who managed to secure any such unit are lucky in receiving an early and valuable Christmas present.