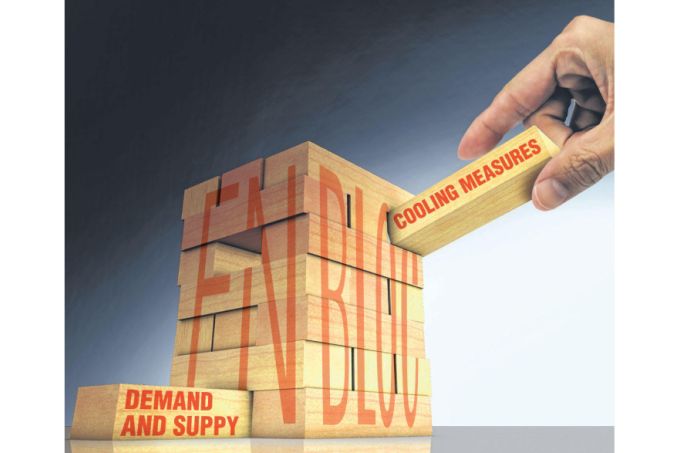 THE collective sale market had started to pick up in 2021 before the property cooling measures hit, a development which will turn developers more cautious.

While deals should still be concluded this year as diminishing unsold supply prompts developers to replenish their land banks, over-priced sites are unlikely to find buyers amid heightened risk.

According to real estate consultancy JLL, a dozen projects worth around S$2.19 billion – 9 residential and three mixed-use sites (based on proposed use) – were transacted in 2021. There were 43 launches in all.

The tally excludes the condominium High Point at 30 Mount Elizabeth that Shun Tak Holdings was poised to acquire for nearly S$556.7 million. The Hong Kong-listed conglomerate, which is said to have pulled out of the deal, had won the tender just days before the latest round of cooling measures were announced.

The number of transactions in 2021 easily pipped that in 2020 as inventory dwindled in the face of strong buyer demand, prompting developers to scour for land. More sizeable sites, such as Peace Centre/Peace Mansion and Watten Estate Condominium, also crept their way onto the 2021 transaction list.

In contrast, only five residential sites worth a combined S$127.3 million were sold in 2020 as the pandemic took hold; 17 were launched for sale that year. 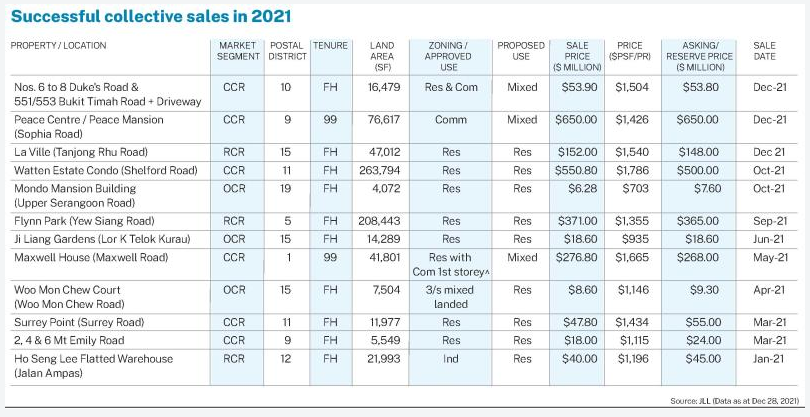 JLL’s executive director of capital markets, Tan Hong Boon, reckons that while “many more” collective sale sites will make their way to the market this year, since a number were at advanced stages of inking their collective sale agreement (CSA), over-priced sites are likely to close their tender without bids. This means that en bloc candidates will have to temper their pricing expectations to seal a deal.

Amid shrinking unsold inventory, developers will still need to acquire sites, he said.

Tan added: “However, they will be extra cautious now and mindful not to overpay so as to ensure the market risks are manageable. Developers will be more focused on the Government Land Sales (GLS) sites, but due to the relatively low supply, we expect some developers to continue to look to acquire collective sale sites.”

For the GLS programme in H1 2022, the government will boost the supply of private homes from sites on the confirmed list by some 40 per cent vis-a-vis H2 2021, even as housing supply on the reserve list will be trimmed.

At about 6,500 residential units across both the confirmed and reserve lists for H1 2022, this works out to a five per cent decline from the prior six months.

Tan added: “We expect these sites are still insufficient for developers’ appetite and the government may be expected to roll out even more for the second half of 2022, alongside more collective sale sites.”

Similarly, chief executive of real estate consultancy Delasa, Karamjit Singh, expects reasonably-priced en bloc sites to find buyers in 2022 before the en bloc market naturally fizzles out amid the government’s ramping up of supply under the GLS programme.

Knight Frank’s head of research, Leonard Tay, said: “The recently announced cooling measures could possibly have derailed any collective sale momentum before it even had a chance to get off the ground.”

Tay expects developers, sellers and buyers to hit the pause button as they absorb the full implications of the property curbs. Among the slew of measures was a tightening in the total debt servicing ratio threshold from 60 per cent to 55 per cent, which may force some buyers to rework their budgets.

On their part, developers are now facing an Additional Buyer’s Stamp Duty (ABSD) rate of 35 per cent – up from 25 per cent; this translates to heightened development risk, especially with larger plots of land.

Other risks for developers include elevated construction costs stemming from a labour crunch and supply chain woes, rising interest rates in 2022 and the prospect of new Covid-19 variants potentially emerging, analysts say.

Even then, the many ageing projects that began their collective sale process last year may pique developers’ interest. “It is likely that there could be a number of en bloc sales that will be concluded in 2022, as these land parcels offer developers a variety of sizes and development quantums,” added Tay.

“If activity in the en bloc market gains momentum in spite of the latest cooling measures, a few more existing, older developments will attempt going the collective-sale route in 2022.” Some developers might also opt to forego the jostling for sites at state tenders by turning to the en bloc market.

Attributes such as a choice location and tenure could also attract developers to certain collective sale sites, over and above parcels released via the GLS, pointed out Edmund Tie’s chief executive, Desmond Sim.

He expects that developers could seek to alleviate risk through joint ventures and partnerships, although market segment and geographical diversification also count when it comes to paring risk. “Small palatable sites spread across the market segments may attract more interest,” he said, pointing out that larger sites come with bigger capital outlay.

Knight Frank’s Tay suggests that developers would look to smaller sites with a development potential of under 500 units. He also doesn’t rule out many developers choosing modest sites of under 200 units, following the cooling measures.

Taken together, the cooling measures and increase in supply on the confirmed list, “(are) expected to moderate the growth in private residential land prices, which have surged over the past year”, said Cushman & Wakefield’s head of research, Wong Xian Yang.

Assuming the government introduces a similar level of supply for the H2 2022 confirmed list of the GLS programme, Wong expects the full-year supply of private residential units (including executive condominiums) on the confirmed list to jump by over 50 per cent in 2022, vis-a-vis the 2021 GLS confirmed list.

In the commercial market, hybrid working is expected to keep the overall office demand footprint below pre-pandemic levels. However, in Singapore “the impact is somewhat mitigated by the tight supply of new offices, withdrawal of stock of office space for redevelopment and relatively shorter commute times compared to many markets” Singh noted.

Foreign or institutional investors, in particular, prefer the office market since such assets offer lower stamp duties and fatter rental returns, he added.

Sim also expects office sites to remain the preferred choice for institutional buyers as long as their balance sheets are able to house these commercial assets. In particular, office developments in the central business district (CBD) should still command attention on the back of limited office supply in the area, he added.