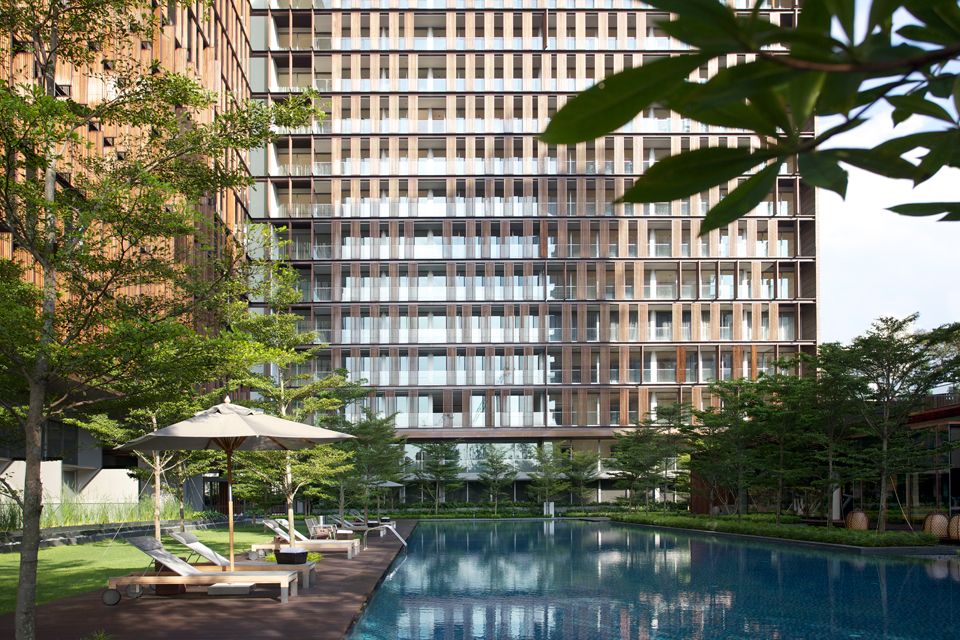 SC Global Developments has sold another penthouse at its Hilltops condo in Cairnhill Circle, this time for $33.5 million or $3,995 per square foot on a strata area of 8,385 square feet.

It is being bought by Chen Liang-bin, a Cambodian citizen, and Li Xiaoping, a citizen of China, BT understands.

‘The unit has five bedrooms with ensuite bathrooms, inclusive of the master suite which comes with a jacuzzi tub and walk-in closet. It also has a large balcony off the living area with views of the city and Marina Bay area.

This is the third penthouse in the completed freehold development that SC Global has sold, based on caveats data.

In October last year, the developer sold a 6,372 sq ft penthouse for $26 million (or $4,080 psf) to Yu Yongfu, a Singapore permanent resident (PR) and a member of the Alibaba Partnership, as reported by BT at the time.

However that unit was sold with furnishings, unlike the latest penthouse deal at Hilltops.

Also sold on an unfurnished basis was the first penthouse transacted in the completed freehold project in late 2019; that was for a 7,728 sq ft unit that fetched $$25.08 million or $3,245 psf.

According to the grapevine, the price tag is about $60 million.

All four penthouses at Hilltops are duplex units, with a main living area on the 20th storey, and a private pool and landscaped deck on the 21st.

The 241-unit project, which received Temporary Occupation Permit in 2011, stands on elevated ground and also has two-, three-, four- and five-bedroom apartments,

It is not known who brokered the recent $$33.5 million deal,

Knight Frank Singapore’s head of residential project marketing, prime sales and leasing, Linda Chern said: “In tandem with Singapore’s attractiveness among family offices, we observed in the first quarter of this year that both foreign and local homebuyers are looking for penthouses, or luxe apartments of at least 3,000 sq ft in prime areas.”

According to Knight Frank’s Wealth Report 2021, the number of ultra-high-net worth individuals (UHNWIs, with at least US$30 million net worth inclusive of their primary residence) in Singapore increased 10.2 per cent to 3,732 in 2020 from 3,387 in 2019 – despite the pandemic-led recession.

Ms Wong added that the strong buying demand for luxe homes has extended to the leasing market, “For the past couple of months, we have seen a shortage in supply of private residential properties for lease in general and more acutely, for GCBs, penthouses and luxe apartments. This is because more of such properties are either sold to buyers who require them for owner occupation or the owners themselves need the property as their home.”

As a result, achieved rents in the past couple of months are about 10 to 15 per cent higher – compared with two years (the typical duration of leases) ago, she added.

The firm’s executive director of research and consultancy, Alan Cheong, says: “Despite anecdotal evidence of expats relocating from Singapore due to job loss, the high end private residential rental market has been heating up as UHNWIs from the region take refuge from the raging pandemic back home, where they fear being infected and not getting timely medical treatment due to a shortage of hospital beds.

“Some of those leasing upmarket homes in Singapore these days had already set up a family office here some time ago but were not that active. But with the pandemic, they are bringing almost their entire families here.”

Urban Redevelopment Authority data released last Friday show that its overall private residential rental index rose 2.2 per cent quarter on quarter in QI 2021, after inching up 0.1 per cent in Q4 2020.

The first-quarter rental increase was led by non-landed homes, especially those in prime areas or the Core Central Region, where rents surged 2.9 per cent in QI 2021, contrasting with a 1.2 per cent drop in Q4 2020.

Analysts note that the rental gains come amid delays in housing completions last year due to disruptions in construction amid the Covid-19 outbreak. Only 3,433 private homes received Temporary Occupation Permit in 2020 ~ half of the 7,527 units in 2019.