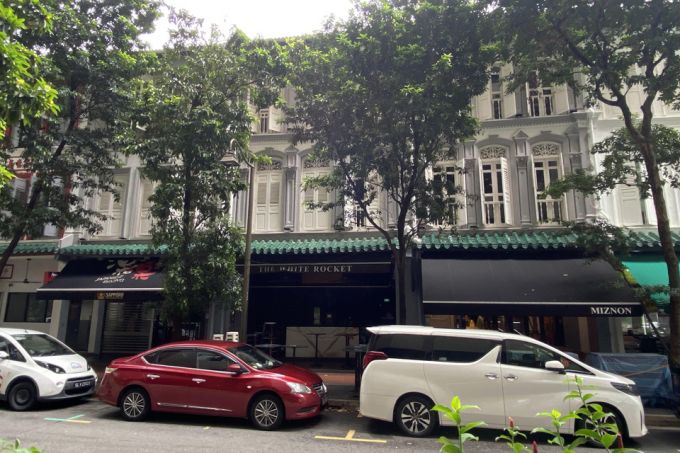 TRANSACTION activity in the Singapore shophouse market has been brisk this year, with strong demand amid the low interest rate environment – from both local and foreign buyers who see it as a property segment that generally holds its value, as it did last year despite the Covid-19 crisis.

Since the start of this year, shophouses worth some $$600.9 million have been transacted, based on CBRE’s analysis of URA Realis caveats data downloaded on May 18. This is two-thirds of the $$908.7 million for the whole of last year.

The limited stock of conservation shophouses, juxtaposed with strong demand especially for freehold/999-year leasehold shophouses in the Central Business District (CBD), are resulting in shophouses changing hands at record prices in terms of per square foot (psf) of GFA (gross floor area) in some locales such as Telok Ayer Street/Stanley Street and Keong Siak area, said CBRE’s senior director of capital markets for Singapore, Clemence Lee, who has brokered nine shophouse deals so far this year.

‘An institutional owner of commercial shophouses who declined to be named estimates that recently transacted prices of freehold/999-year shophouses that are in good condition in highly-soughtafter parts of Districts 1 and 2 are at least 10-15 per cent higher than pre-Covid levels in second-half 2019.

Agreeing, Mary Sai, executive director of capital markets at Knight Frank Singapore, said: “In the past few months, transactions of conservation shophouses have been fast and furious.

“We are seeing owners calling for $$4,500-5,000 psf on GFA for 999-year leasehold/freehold shophouses in prime CBD locations such as Amoy, Telok Ayer and Stanley streets as well as Boat Quay.”

Ms Sai highlights that one issue with comparing shophouse prices is that information on floor area is not included in the property title for most shophouses; the exception are strata titled shophouses for which the strata area is included.

“Seasoned shophouse buyers, before making a commitment, want to have verification of the floor area via the relevant surveyed plans fora property.”

Amid the flurry of transactions, rising prices and declining rental yields, a seasoned shophouse investor sounds a note of caution.

high prices, by foreign buyers who are new to the market. Is this good for the market?”

Market observers say that when banks assess loan applications for a shophouse purchase, they scrutinise the cash flow/rental income from the property. Given the ongoing resurgence of Covid-19 infections here and the expected disruption and uncertainty for businesses, it would be challenging for landlords to raise rents; in fact, most tenants will seek rental reductions.

In similar vein, Mr Chen said: “The leasing market is not looking good. ‘The restrictions that began on Sunday – including the ban on dining-in at eateries – will last about a month and possibly longer. They will have an impact on most tenants, be they for F&B, retail or office space; they will hold back their plans.

“Businesses will become more cautious, and borrowing costs are also likely to go up. We cannot just raise rents when tenants are suffering. The outlook is not the same as before.’

Market watchers say that among the notable shophouse sales this year, though not caveated and hence not reflected in the URA data, are three adjoining freehold properties at 4, 5 and 6 Stanley Street sold by entities of the Calamander Group.

The transaction, which was through the sale of shares in entities owning the shophouses, priced the three shophouses at around $45 million, The Business Times understands. The buyer, who hails from China, is a citizen of Saint Kitts and Nevis.

Calamander Group has also sold 42 Tras Street, on a site with 99-year tenure from March 1995, for $$10.6 million to Singapore-incorporated Galatea Services, which is fully owned by

Swiss national Philippe Melliard. Galatea, set up two years ago, is a venture capital group with an issued capital of 100 million euros (S$162.39 million), according to the Handshakes portal.

The Tras Street deal has been caveated, as also is Duck & Hippo group founder James Heng’s $$17.75 million purchase of the freehold 9 Stanley Street from a Singapore-incorporated entity ultimately controlled by a Japanese. (Mr Heng sold Duck & Hippo group in 2018.)

Meanwhile, Wah Loon Engineering founder Alan Chong is selling 198 Telok Ayer Street for $$17.38 million to a Chinese citizen, Mr Chong will be making a gain of nearly 17 per cent in under two years.

He paid S$14.88 million for the property in September 2019 – prior to the Covid outbreak. Mr Chong has bought several properties after selling most of his stake in Wah Loon Engineering to Vinci Energies Asia Pacific in 2018.

In the Keong Saik locale, an entity owned by Chan Soo Khian, the founding principal and design director of SCDA, is selling 10 Teck Lim Road at

An entity connected to veteran property investor Stanley Quek sold 34 and 36 Tras Street for S$12 million to a local UHNWI. The deal was brokered by Krystal Khor of boutique property agency Mondania.

“These overseas buyers have a passion for conservation and heritage properties, particularly in our historic districts in prime CBD locations.”

CBRE’s Mr Lee says: “We have also observed new local investors, pre- dominantly family offices and high net worth individuals, who were previously not in the shophouse market, enter – reflecting the strong confidence in such assets which are in limited supply.”

Foreigners and locals alike can buy commercial shophouses here. There is no additional buyer’s stamp duty; neither is any stamp duty payable on exiting the investment.

The added attraction of this property segment to foreigners is that they are allowed to buy shophouses on sites that are fully zoned commercial, giving them ownership of the land title. In contrast, they face restrictions in buying landed homes.

CBRE’s Mr Lee said that those willing to sell shophouses in the past few months were mostly boutique property funds and local high net worth individuals and family offices that have held on to these properties for a long time. “With prices having appreciated over the past few years, they feel that it is a good time to sell and realise their gains so as to recycle their capital.”

‘An example would be Arce Holdings. In February, it sold a pair of adjoining freehold shophouses at 22 and 23 Mosque Street for $$21.5 million after holding them for about a decade.

Arcc has also put on the market a pair of 999-year leasehold shophouses at 44 and 46 Club Street, which it also bought around the same time.