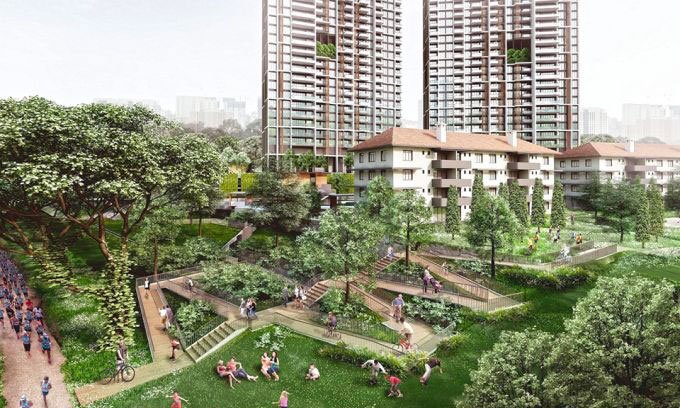 THE public preview of Avenue South Residence will commence this Friday, with 300 units to be offered for sale at the initial launch on Sept 7.

The apartment units are spread across two 56-storey towers and five conserved four-storey apartment blocks. Units comprise one-, two-, three- and four-bedroom units ranging from 474 square feet (sq ft) to 1,668 sq ft. In addition, the development will offer close to 10,000 sq ft of commercial facilities, including food & beverage outlets and a childcare centre.

The consortium behind Avenue South Residence – UOL Group (UOL), its subsidiary United Industrial Corporation Limited (UIC) and Kheng Leong Company – expects it to draw interest from both owner-occupiers and investors, pointing to upcoming projects in the vicinity such as the Greater Southern Waterfront.

Liam Wee Sin, UOL group chief executive, said: “Given our competitive land price, we are able to offer a product at attractive prices starting from S$858,000 for a one-bedroom unit and S$1.15 million for a two-bedroom unit. Half of the 1,074-unit development are priced below S$1.5 million, offering buyers plenty of choice units to capitalise on the area’s growth story and unique character of this development.” The land parcel was awarded to the consortium in May 2018 at S$1.035 billion or S$1,138 per square foot (psf) based on gross floor area.

Units categorised under the Heritage Collection will be sold at the initial launch at an average price of S$1,780 psf, Horizon Collection at S$1,980 psf and Peak Collection at more than S$2,250 psf.