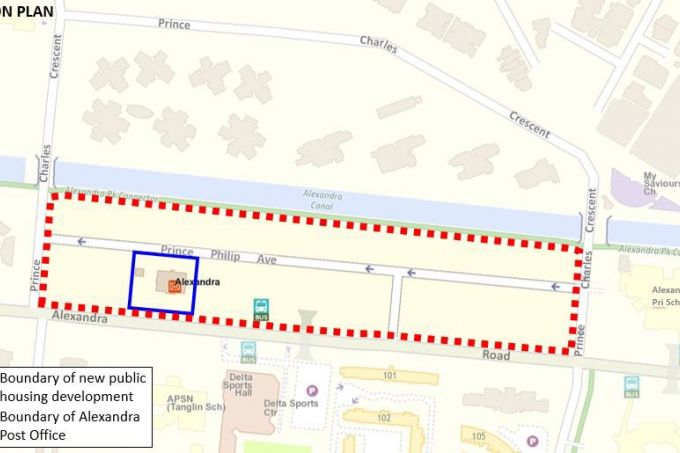 A BROWNFIELD site spanning about 3.7 hectares bounded by Alexandra Road, Prince Charles Crescent and Alexandra Canal is being redeveloped by the government for future public housing.

The move will potentially add about 1,500 flats to Singapore’s public housing landscape, the Housing & Development Board (HDB) and Singapore Land Authority (SLA) said in a joint press statement on Wednesday (Dec 15).

As part of the redevelopment, SLA has gazetted the acquisition of about 0.23 hectares of land occupied by Alexandra Post Office and SingPost’s tenant. This is to allow for the building of more residential units and more optimal planning and design of future public housing projects.

The plot, located in the mature Bukit Merah estate, is near the Alexandra Park Connector and also 400 metres from Redhill MRT station.

The site was home to low-rise public rental flats, shops and a market before they were demolished in the 1990s and later earmarked for residential development in 1998.

HDB is drawing up detailed plans for the Alexandra Road and Prince Charles Crescent housing projects, with more details to come, the statement added.

According to most analysts, the site is unlikely to fall under the new prime location public housing (PLH) scheme because the site is near, but still outside the prime district.

However, Nicholas Mak, head of research and consultancy at ERA, noted that there is a limited amount of empty land in the area. He added that rent in the Redhill and Tiong Bahru area is relatively high, which could drive demand and prices in the long run. This might encourage the government to place the newly developed units under the PLH scheme, Mak said.

That said, the analysts agreed that the development will likely draw high demand due to its strategic location and connectivity to other parts of Singapore. Christine Sun, senior vice-president of research and analytics at OrangeTee & Tie, said the site could see a subscription rate close to that of Queen’s Arc in Queenstown and Telok Blangah Beacon in Bukit Merah. Both launched for build-to-order (BTO) this year, the housing sites saw overall subscription rates for 4-room apartments reaching 7.7 times and almost 50 times respectively.

Meanwhile, Lee Sze Teck, senior research director at Huttons Asia said that City Vue @ Henderson, which is a project under the selective en bloc redevelopment scheme (SERS), have been sold at prices between S$620,000 and S$1,256,000.

Lee Nai Jia, deputy director of the Institute of Real Estate and Urban Studies (IREUS) at the National University of Singapore, added: “This site may be a good place to introduce some flexi 2-room units with palliative care for single elderly. The demographic of the district is older and provides an opportunity to the single elderly to age in place without uprooting their social connection.”